The Akron Racers are an American professional fast-pitch softball team located in Akron, Ohio. They are one of six teams that play in the National Pro Fastpitch League (NPL.) The Racers were founded in 1999 by General Manager and Co-Owner Joey Arrietta, who still serves the same title for Akron today.

Arrietta has had a long history in softball, taking the University of Akron’s softball program from slow-pitch to fast-pitch in 1980, her third year in control of the program. Arrietta concluded her Akron Zips days as one of the most successful coaches in Zips sports history, posting a 359-135-4 record during her time there.

Akron started in 1999 in the Women’s Pro Softball League (WPSL) but were moved to the new NPF in 2004 after the league suspended operations in 2001 due to the league wanting to research and create a new team management model. 2004 would be the start of the NPF.

The Racers would lose the NPF semifinals in their first year back but would go on to capture the 2005 Cowles Cup (NPF Championship) after beating the Texas Thunder 1-0 in Game 2 of the league’s three game championship format which includes four teams competing in a one-game playoff format.

Game three would come against the Chicago Bandits and superstar pitcher Jennie Finch. Akron won the game 5-4 in eight innings on August 28, 2005.

Chicago would enact revenge in 2011, beating Akron in the NPF Semifinals and again in 2015 in the same series. 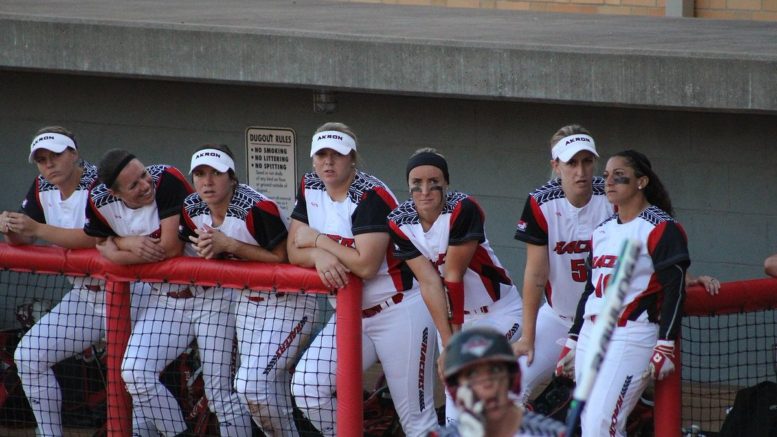 s had much success since becoming a professional team in 1999, only missing out on the playoffs twice. The first in 2000 and then again in 2008.

2016 marked the 15th anniversary of the Racers and to celebrate that, Akron inducted 30 former players as their 2016 Akron Racers IMPACT Honorees. These players were chosen by a panel that evaluated the top 30 players that impacted the team the most.

Three of the Racers four retired numbers were included on that inductee list.

Also in 2016, Rawlings Gloves awarded their first gold glove given to a female. Akron Racers’ outfielder AJ Andrews was the recipient.

Currently the Racers are the longest tenured team in the NPF after completing their 16th season of play in 2017.

Akron currently plays their home games at Firestone Stadium where they’ve been the primary tenant and care taker since their inaugural season in 1999.

Firestone Stadium has played host to a couple notable events over the years and especially since the Racers took over in 1999.

In 2008, Firestone hosted the 2008 USA National Team, setting a record for the largest crowd in stadium history with 6,256 fans in attendance.

Akron’s home stadium also has hosted an abundance of tournaments including the NCAA’s Mid-American Conference Tournament and the 2008 NCAA Division II National Championship.

At the start of 2017, Firestone Stadium received $200,000 invested by Akron Racers Charities to renovate the playing surface which included a new draining system, bluegrass sod and a 200-foot permanent fence.

Zach Harley is a freelancer from Parma, Ohio.