You are at:Home»Sports»Akron Roller Derby 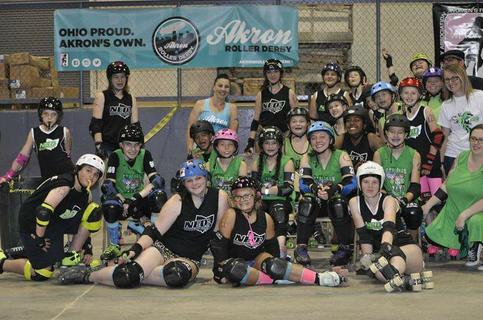 In November of 2016 two separate Akron-based leagues, Northeast Ohio (NEO) Roller Derby and the Rubber City Rollergirls, merged to become what is now known as the Akron Roller Derby.

The Akron Roller Derby consists of two teams who both compete against teams from other leagues.

It is a member of the Women’s Flat Track Derby Association (WFTDA.)

Akron’s original roller derby league was founded in June 2006 by Mary Elliott with the inaugural team going by the name of the Rubber City Demolition Dolls.

About a year later, Elliott left the roller derby but the league stayed intact. Elliott did keep naming rights to the Rubber City derby team.

Proceeding Elliott’s departure, a group of 11 women from the Demolition Dolls went on to form the Northeast Ohio Rock ‘n’ Roller Girls, which now belongs to the NEO Roller Derby.

The Roller Derby’s two teams are described as the A team and the other being the B team.

The NEO Rock ‘n’ Roller Girls were designated to serve as the A team during their stretch.

Currently the Roller Derby’s A team goes by the All Stars while their B team goes by the name of the AK Rowdy Rollers, which plays off of the University of Akron’s locally famous student section, the “AK Rowdies.”

In 2008, the Rubber City Rollergirls were founded after receiving permission from Elliot to use their new and improved name.

Prior to the 2010 campaign, the league was accepted into the WFTDA Apprentice program and instituted its B team later in the year. The B team would go by the name Hot Rod Dollies while their A team skated out as the Tire Iron Maidens.

By 2011, the league had expanded to 40 skaters and was allegedly bringing in crowds of around 1,000 fans per competition.

In 2013, the league left the WFTDA Apprentice program but by October of 2014, Rubber City re-entered the program.

2013 was also the only admittance into the WFTDA playoffs, finishing fourth in the playoffs while finishing with a WFTDA ranking of 51st, winning seven of their 13 competitions.

The WFTDA Division 2 International Playoffs in which the NEO Roller Derby was admitted in 2013 was held in Kalamazoo, Michigan that August. They would lose the third-place game to the Kalamazoo Derby Darlins 250-219.

Currently the WFTDA ranks 335 teams around the country that qualify for ranking. In order to be eligible to be ranked, a team must play at least three sanctioned games against three unique opponents to qualify.

Seasons span from December 1 to June 30.