The Akron Rubberducks are an American baseball team that serves as the Class-AA affiliate of the Cleveland Indians, Cleveland, Ohio’s Major League Baseball team. They currently play their games in the Eastern Division placed in the Western League.

The franchise began in 1980 as the Lynn Sailors located in Lynn, Massachusetts.

After the 1983 season, then-owner Mike Agganis moved the team to Burlington, Vermont where they would become the Class-AA affiliate of the Cincinnati Reds, going by the Vermont Reds from 1984-1987. During that four-year stretch the Reds failed to miss the playoffs, winning three straight Eastern League titles from 1984-1986.

The Reds would become the Mariners for the following 1988 season as they would move their allegiance back to Seattle’s organization.

After the 1988 season, Agganis moved the team once more, this time to Canton, Ohio where they would call themselves the Canton-Akron Indians, making five straight playoff appearances from 1989-1993. During that time, they captured their first regular season title in franchise history during the 1992 season.

In their eight seasons in Canton, the then Indians played their games at Thurman Munson Memorial Stadium, named after former Major League catcher and Canton-native, Thurmon Munson. The stadium is now home to the Malone University Pioneers.

On November 22, 1994, Agganis moved the team again, signing a leasing agreement with the city of Akron. This time, the move would stick, as the Canton-Akron Indians became the Akron Aeros officially in November of 1996.

Their new stadium would become Canal Park, located in Downtown Akron, Ohio, after breaking ground on January 5, 1996 and finishing in February of 1997.

In their first season, despite a horrendous record of 51-90, Akron led all of Class-AA in attendance, drawing 473,272 fans to their brand-new park. On September 6, 1999, Akron set an Eastern League attendance record for the third straight seasons, drawing in 522,459 fans.

Akron, during that season would become the first Class-AA team to draw half of a million fans in a single season.

Success started to build in 2002 as they posted the third best record in Eastern League history, recording a 93-48 record. They would continue that success, securing two league championships (2003,2005.)

Akron would go on to make the Eastern League Championship Series five straight years from 2005-2009, winning the aforementioned 2005 title as well as the 2009 championship.

In October of 2012, owner Mike Agganis sold the team to Ken Babby.

One year after Babby purchased the Akron Aeros, he went on to change the name of the Aeros to the Rubberducks on October 29,2013. The Rubberducks name paying homage to Akron’s unofficial nickname of the ‘Rubber City’ due to big tire plants; Goodyear, Firestone, Goodrich and General Tire, being located in Akron. 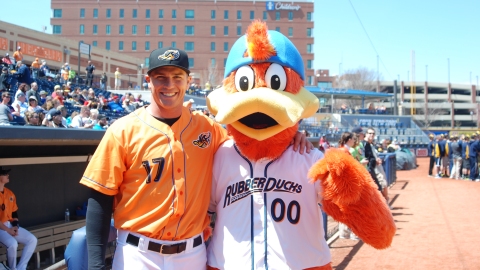 Zach Harley is a freelancer out of Parma, Ohio.