You are at:Home»Sports»Anderson Varejao: I’ll Go to Europe if Cavs Don’t Trade Me 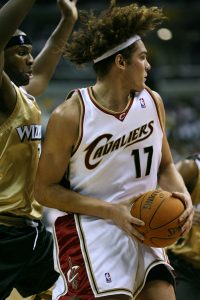 Cleveland Cavaliers forward Anderson Varejao is mad as hell and he isn’t going to take it anymore. The 6 ft 10 in forward from Brazil has spoken to ESPN.com, and if you are Cavaliers fan the news is not good. Here is what he told them:

“I wanted to come back. I love the fans and I really love my teammates,” Varejao told ESPN.com in a phone interview from Brazil. “But there are others there that have made it very difficult.

“It’s gotten to the point that I don’t want to play there anymore. I’m just hoping for a sign-and-trade at this point.”

“There are a lot of things being written that are wrong. I know they aren’t talking to me or my agent,” he said.

On what he thought about Danny Ferry flying to Brazil to try to persuade him to join the team:

“I was shocked,” Varejao said. “He showed up and wanted me to sign a contract. I told him he’s got to talk to my agent. He didn’t even up his offer. I guess he thought if he just showed up, I would just sign whatever he gave me.”

“I’m willing to go and play in Europe if that’s what it takes. I know it’s a risk and I’ll be a restricted free agent next year, but at least I’d be happy. . . . Life’s too short to be unhappy.”