You are at:Home»News»Aubrey Huff: From MLB Baseball Player to Shockjock 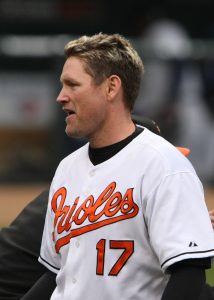 Aubrey Huff must be getting tired of playing baseball and has a burning desire wants to replace Howard Stern when the shock jocks contract expires with Sirius Satellite Radio. The Baltimore Orioles DH, who hails from Marion Ohio, did everything he could to offend the city of Baltimore and wrangle the front office of the team he plays for.

Last week Huff spent some time with Bubba The Love Sponge on Sirius Satellite Radio. He had a memorable performance but when people started to find out about what he talked about on the show it ruffled a few feathers for the O’s. He called the city of Baltimore “That horseshit city” and swore repeatedly on the show.

Making matters worse for the ballplayer is the video in which he appears with a naked female painting her bare butt while she is completely naked on camera. Andy MacPhail, didn’t find his antics funny.

“I just think it was tasteless and offensive, and you can count me among those offended,” said Andy MacPhail, Orioles president of baseball operations.

Huff is trying to get past the controversy saying on family friendly radio ESPN Radio 1300:

“We’re not politicians. We’re baseball players. There are certain things you can or cannot say. Was it over the line? Maybe a little bit. But it was all in good fun. Hopefully, it didn’t offend anybody. If it did, so be it.”

Considering Huff signed a 3 year contract worth more than $20 Million Dollars last season, it would probably be best to go by that old saying: Don’t quit your day job.