You are at:Home»Sports»Bernie Kosar Biography

Bernie Kosar was an American professional football player from 1985 to 1996, spending most of his time as the starting quarterback for the Cleveland Browns.

Kosar would forego his last two seasons of collegiate football and announce that he was going to enter into the 1985 NFL Draft.

After controversy broke out about his draft eligibility after his paperwork was considered ‘late’ by the NFL, Kosar opted to enter the NFL Supplemental Draft and was chosen by his hometown team in the Browns with the first pick in the draft.

Although Kosar never enjoyed a Super Bowl trip in Cleveland, he quickly became a fan favorite throwing for 3,854 yards in his first full season as the Browns’ starter and finished second in the league with 310 completions.

From 1986 to 1989, Kosar and the Browns earned three trips to the AFC Championship game with all three trips ending in the same fashion; a loss to John Elway and the Denver Broncos.

In 1990, his last great season as a Brown, Kosar set an NFL record for consecutive pass attempts without an interception with 286. The following year Cleveland would hire Bill Belichick as head coach and in 1993, Kosar would be released after a Week 10, 29-14 loss to Denver.

Kosar in his Cleveland career would throw for 21,904 yards with 116 touchdowns while throwing 87 interceptions in 108 games.

Bernie currently sits behind Brian Sipe and Otto Graham at third all-time in passing yards by a Cleveland Browns quarterback and is only one of five quarterbacks to pass for over 10,000 yards in a Browns uniform.

Kosar also sits at fourth all-time with 116 touchdowns and second all-time among qualifying quarterbacks in completion percentage, behind Tim Couch, with a percentage of 58.8%.

After being released by the Browns in 1993, he joined the Dallas Cowboys for the remainder of the season to fill in 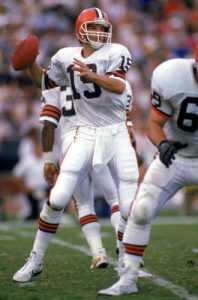 for an injured Troy Aikman. Kosar would sign a one-year, $1 million contract with Dallas and would earn his only Super Bowl ring in Super Bowl XXXVIII as a backup. Bernie only had one play in the Super Bowl as he entered the game to kneel down and guarantee victory for “America’s Team.”

After his four games in Dallas, he would end his career in Miami, where he went to college, as Dan Marino’s backup for the Dolphins. Over the course of those three years, Kosar would only start two games and throw five touchdowns and six interceptions over that span. He would go on to retire after the 1996 season after only attempting 32 passes that season, his second lowest in his career with his lowest total coming in his first year of Miami which saw him attempt only 12 passes, completing seven of them.

Bernie is a Cleveland favorite despite being knocked out of the AFC Championship three times by the Broncos and had a song made about him called “Bernie Bernie,” taking after The Kingsmen’s hit “Louie Louie.”

Kosar has since had stints in the Browns front office as well as an analyst on the Cleveland Browns Radio Network.