You are at:Home»Visit»Cleveland Hotels Guide 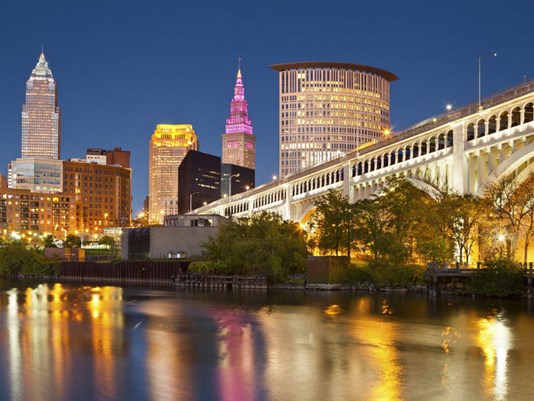 Cleveland, Ohio has been going through a rebirth over the last 10-15 years. From The Cleveland Cavaliers ending the City’s 52 year championship drought and hosting the 2016 Republican National Convention, Cleveland as a whole is re-emerging as a major player in the Midwest and a viable tourist stop. Upgrades to Playhouse Square, First Energy Stadium, Progressive Field, Quicken Loans Arena, the introduction of 3 casinos, a new Convention Center and the significant comeback of The Flats are clear signs of a economic rebound.

As Cleveland continues its comeback, more people will visit the city and in response, many of the city’s hotels have followed suit in putting their best foot forward. From partial upgrades, full renovations and in some cases new buildings entirely have drastically changed the landscape in terms of hotel offerings.

This guide will alert tourists and life long residents of some of the best places to stay in Cleveland along with many of the city’s prime attractions.

Downtown Cleveland is in the midst of a dramatic transformation that is a national success story. New hotels, restaurants and venues along with massive revitalization of existing structures make Downtown unrecognizable to life long residents. This is one of the primary reasons why many tourists choose to stay downtown.

The Westin Cleveland Downtown is located less than a 5 min walk to First Energy Stadium, The Galleria and The Cleveland Convention Center and a 2-5 minute Uber/Lfyt drive to many of Cleveland’s best attractions such as Quicken Loans Arena, West 25th, Playhouse Square and Progressive Field.

Like many establishments The Westin has been renovated to reflect the modern times and is is one of the treasures of the New Downtown Cleveland. It is a sumptuous experience to behold and has a variety of features that will appeal to all travelers. Amenities such as rainfall showers, LCD TVs, valet parking and fitness area help justify its 4 star rating.

The Hyatt Regency Cleveland At Arcade

The Hyatt Regency Cleveland at The Arcade located in the epicenter of Downtown Cleveland in the Historic Arcade Building. The Hyatt Regency has many stores and businesses throughout the building that helps retain its charm that has been a signature attribute of The Arcade since its inception in 1890.The Hyatt is walking distance from Playhouse Square, Public Square and East 4th. The Agora, The Flats, Rock n Roll Hall of Fame, West 25th and Edgewater Park are a 5-10 min Uber/Lyft ride away.

On site Spa, hair salon,porter/bellhop, bar/lounge area, dry cleaning/laundry service, Valet and pet- friendly rooms are some of the benefits The Hyatt Regency Downtown offers its guest. With awe- inspiring views of Downtown Cleveland and Lake Erie, The Hyatt Regency Cleveland’s decadent rooms and suites have a host of plush features such as hypo-allergenic beds and private bathroom with designer toiletries.

Cleveland Hopkins Airport along with the rest of Cleveland has enjoyed long overdue improvements over the last few years as Cleveland continues to march to renewal and sustained success. Listed below are some hotels travelers can choose if they need to remain close to the airport.

If you are the type of traveler who under no circumstances want to miss your flight, The Sheraton Cleveland Airport Hotel is the best choice in town. Literally a 2 min walk to Cleveland Hopkins Airport, The Sheraton Cleveland Airport is the epitome of an “Airport Hotel”. This hotel has accommodations for all types of travelers such as indoor pool and spa, free Wi-fi, concierge,business center, fitness area, bar and grill and luxurious rooms. Free airport transportation is available if you are in a hurry and for inclement weather.

Located right off the freeway, you are a 10-15 minute Uber/Lyft ride from Downtown Cleveland and a host of attractions such as Quicken Loans Arena, Progressive Field, First Energy Stadium and Jack Casino to name a few and 3 minutes from The I-X Center. Because of how close The Sheraton is to the airport and catch a train ride downtown for $5 or less by walking to the airport and hopping on the RTA Red Line Rapid.

The Holiday Inn Express Cleveland Airport is located one mile from Cleveland Hopkins Airport. One the highest rated hotels in Cleveland, The Holiday Inn Express is a great option for travelers. With its close proximity to Baldwin Wallace College, the I-X Center and 10 miles from Downtown Cleveland, guests can catch an Uber/Lfyt and be downtown in 10-15 minutes. For the more frugal guests, You can use the free shuttle to the airport and catch a train ride downtown on the RTA Red Line that will drop you right at Jack Casino.

Upon returning, guest can indulge in a plethora of amenities the Holiday Inn Express has to offer such as the indoor pool and spa, off site restaurant delivery for dinner, cable TV with premium channels and NFL Ticket for all guests. Continental Breakfast bar and newspapers are available at no additional charge.

Quicken Loans Arena is home to the 2016 World Champion Cleveland Cavaliers and 2016 AHL Champion Lake Erie Monsters. In addition, “The Q” hosts Premier concerts, shows and conventions year round and is 1 half of the storied Gateway Project which gave us Quicken Loans Arena and Progressive Field in the early 1990s.

Located across the street from Quicken Loans Arena, The Radisson Hotel Cleveland Gateway is the optimal choice if you want to be in the thick of the action. Cavs game, concert, going to East 4th after the game ,Jack Casino to try your luck, or an Indians game at Progressive Field, you are walking distance from one of the hottest areas in Downtown Cleveland. After a night of fun, you can wake up to complimentary cup of coffee and newspaper. Fitness area, room service, business center and free Wi-fi are available for guests.

The Renaissance Hotel Cleveland is located in what could be considered “Grand Central Cleveland” inside of the Tower City Center that houses the hotel, Tower City Shopping Center and Jack Casino in the revamped Public Square. A 5 min walk to Take Five, which is Cleveland’s premier live jazz club, Playhouse Square, Quicken Loans Arena, Progressive Field and 2-5 min Uber/Lyft ride to The Flats, Tremont, Rock and The Rock and Roll Hall of Fame, The Renaissance is arguably the cornerstone of the city.

Equipped with many of the features one would expect from a high end hotel such as concierge, free Wi-fi, indoor pool, swank restaurant and bar and room service, The Renaissance is second to none in terms of amenities and comfort.

First Energy Stadium is Home to The Cleveland Browns, one of America’s most historic and beloved NFL Franchises where the nation’s best fans cheer for their team every year regardless of record.

The Hampton Inn Cleveland is an excellent choice if you are in town to catch a Browns game. It has many of the trimmings you would come to expect from an upscale hotel such as free internet and WI-fi, breakfast buffet, business and fitness centers along with express check out and dry cleaner/laundry service.

You are steps away from east 4th, Jack Casino, the new Heinen’s Grocery Store , The Galleria at Erieview and the Cathedral of St. John The Baptist. A short 2-5 min Uber/Lyft ride will get you to First Energy Stadium in time for kick-off, West 6th, The Flats and Tremont. If you choose to walk to the game it is only a 5-10 minute stroll. In addition, you are a 5-10 min walk to Quicken Loans Arena and Progressive Field, Playhouse Square and The Arcade.

If you really want to experience the best of what Cleveland has to offer from a hotel, The Cleveland Marriott Downtown at Key Center is apt to the task. Located in Public Square, This hotel is one of the city’s signature luxury hotels. With classic amenities such as a shoeshine stand, limousine, concierge and valet dry cleaning services available, The Cleveland Marriott Downtown at every turn aims to exceed expectations.

You are footsteps away from Jack Casino, Tower City Center, East 4th , The Cleveland Mall and First Energy Stadium to see the Browns play. Prior to the game, the views of Downtown Cleveland and Lake Erie are spellbound., which will make your morning coffee that much more enjoyable.

The New Cleveland Convention is another jaw-dropping addition to the Cleveland landscape. Located right on The Lake, it is in a prime location for tourists and residents to enjoy conventions and activities

After undergoing a multi-million dollar remix, The Ritz-Carlton has become a standard-bearer when it comes to extravagance and 5 Star accommodations such as that properly embody the name and brand that is Ritz-Carlton. If Coming to America II was filmed in Cleveland, The Ritz-Carlton would most likely be where Prince Akeem would stay.

With upscale rooms, complimentary food and entertainment for Club Level Guests, The Ritz-Carlton makes everyone feel like royalty. Located in the Tower City Center, The Ritz-Carlton has you in prime position to enjoy the best of Cleveland. Jack Casino, Morton’s Steakhouse and Tower City Shopping Center are all in the building. The views of the city, Lake Erie and The Cuyahoga River are stunning. The Cleveland Convention Center, Take Five Jazz Club and Playhouse Square are 5-10 minute strolls. Progressive Field is the home of the 2016 American League Champion Cleveland Indians. Every summer fans from all over converge to cheer on the beloved Tribe.

Metropolitan At The 9, Autograph Collection

The Metropolitan At The 9 Autograph Collection has a Las Vegas and Hollywood feel to it that is undeniable. With its signature Jumbo-tron and spotlights, guests are made to feel like they are A-list celebrities and world class athletes. Located a few steps from Progressive Field, The Metropolitan is another one of Cleveland’s most prestigious hotels.

With several clubs and restaurants such as The Vault, Azure Rooftop Lounge and and the Ledger, you can have a diverse partying experience without leaving the building. Heinen’s Market, which one of the Cleveland’s oldest family-run grocery store known for its world class food is also on the premises if you desire to purchase your own food. Everything about this hotel screams posh, from the upscale lobby, exquisite rooms and suites to the Alex Theater where guest can enjoy films and live performances…all of which before or after you catch an Indians game.

Cleveland State University is one of the area’s best public universities. Some of the nation’s best and brightest attend school here.

The Kimpton Schofield Hotel is a boutique hotel located in another Cleveland Landmark the Schofield Building. Another Cleveland rebirth story, The Kimpton has breathed life into this beloved edifice with upgrades that are divine. With most of the major downtown attractions such as The Cleveland Convention Center, Playhouse Square, and Quicken Loans Arena less than a mile away, guest can opt to stroll of take a 2 min Uber/Lfyt trip to enjoy the best of the City.

The intercontinental is located right on the campus of Cleveland Clinic, one of America’s premier hospitals. A 4.5 star hotel, The Intercontinental is jam-packed with amenities that are worthy of an upscale hotel such as multiple restaurants, fireplace in lobby, express check out, sauna and roll in shower. Case Western Reserve University, Little Italy and Coventry are 2-6 min Uber/Lyft trips away along with the Cleveland Children’s Museum and the Museum of Contemporary Art Cleveland. The Multilingual staff aim to please, which is why travelers the world over choose the Intercontinental.