Cleveland has been known for years to have a serious love affair with food. There are hundreds if not thousands 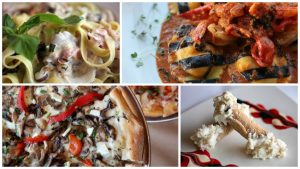 of restaurants of all kinds where you can indulge in the culinary treat of your choice. Possessing one of the most notable and historic Little Italy Districts in America, it should be no surprise that Cleveland has a large number of high-quality Italian Restaurants.

It is a fact that Little Italy does have an impressive list of restaurants. That being said, Cleveland has an abundance of Italian Restaurants spread throughout the city. No matter what side of town you stay, There is a place where you can enjoy your favorite Italian entree. If you are a serious Italian lover, you already have your favorite places in mind. The ClevelandLeader list of Best Italian Restaurants in Cleveland will help you discover new places to indulge.

If you are catching a concert or play at Playhouse Square, Cibreo Italian Kitchen is an excellent choice before the show. Rated as one of the best Italian Restaurants and designated as an A-List Restaurant in Northeast Ohio, Cibreo will not disappoint. Some of the Tuscany-inspired dishes include the Seafood Risotto, Tuscan Braised Beef C.A.B., Cibreo Board and the Ricotta Gnocchi. If you are on a budget, Cibreo has a 2 for $40 special on Mondays that includes 1 appetizer, 2 entrees and a bottle of wine. That is arguably the best deal Downtown Cleveland has to offer at an A-List establishment.

Award-winning Chef Zack Brunell’s fourth restaurant in Cleveland, Chinato is focused on preparing simple Italian dishes that are flavorful. The atmosphere aims to take you back in time to 1920s Italy. Possessing an exquisite wine list and entrees such as Crispy Shrimp with Candied Cherry Tomato Coulis, Lamb Shoulder with Roasted Potatoes, Brussels, Sprouts, Cipollini Onions and Ricotta Salata, Chicken Legs “Saltimbocca” Style, Spaghetti with Clams, Casareci with Pork Cheeks, Marinara and Broccoli Rabe along with Traditional favorites Like Pizza with Old Wolrd flair, Chinato is sure to please.

Located in the immaculate Aloft Hotel on the East Bank of The Flats, LAGO has been one of the premiere Italian Restaurants in Cleveland since 2006. With stunning views of Lake Erie and The Flats, LAGO’s dining experience is exceptional. Their emphasis on Sicilian cuisine has helped LAGO rise in stature among dining establishments in Cleveland. Some of the more popular dishes include the Kobe Beef Carpaccio, Dominic Pizza, Long Bone Veal Chop, The Lago Burger and the Pappardelle.

Recently moved to its new location in the Ohio Savings Bank Building, Porcelli’s has been one of Downtown Cleveland’s go-to spots for great Italian food at reasonable prices. Some of the more notable entrees are Blackened Salmon, Lobster Ravioli, Bucatini as well as classic dishes like Veal Parmesan and Linguini with Shrimp.

Since 2013, Luca Italian Cuisine has been revered as a top pick for a upscale meal in Cleveland. If you and your significant other love Italian, this is one of a few places I would recommend taking them to propose marriage or celebrate an anniversary. Along with over 100 wines to choose from, Luca has a plethora of entrees that amazing. Some include Pappardelle Alla Bolognese, Ravioli Di Aragosta, Costolletta Di Agnello, Filetto Di Manzo and Anatr Arrosto.

Celebrating 25 years of being in business in 2018, Johnny’s Downtown has built their reputation on quality and consistency in all facets of their restaurant. From their Award Winning Wine List, to their freshly made pastas, Johnny’s commitment to excellence is evident as soon as you walk through the door. Some of the meals that have made them famous include the Large Tower, Italian Feast, Pan Seared Lake Erie Grouper, Filet of Beef Au Poivre, Filet of Beef and Lobster and the Veal Scallopini and Shrimp.

Trattoria on the Hill

The Little Italy District in Cleveland is one of America’s oldest and most significant so finding a great Italian restaurant is not a hard task to accomplish. That being said, Trattoria on The Hill is one of the Cleveland’s finest and it has been for a long time. In addition to having an intimate meal, many people have made use of its private party rooms to host events. A few of the entrees that keep fans coming back weekly include the Shrimp and Gnoochi Trattoria, Linguine Aglio Oli, Lamb Chops Calabrian with Artichokes, Strip Steak as well as a host of Custom made Pizzas. Some include to Margherita and the Shrimp and Pesto Pizza.

One of the newest Italian restaurants in town, Nora is fastly establishing itself as a favorite in Little Italy and that is saying a lot considering the tradition of culinary excellence of the area. Their Seasonal menu offers a wide selection of dishes that are pleasing to the eye and the palate. Some of definitely not as traditional as let’s say Chicken Parmesan or Shrimp Linguine yet their offerings are to be highly considered. Some include Bacon and Eggs Antipasti, Agnolotti, Chicken Saltimbocca,
Bucatini and Crab Cake Arancini.

This year marks 100 years that Guarino’s has served Cleveland and is regarded as the oldest restaurant in the city. Originally started as a speakeasy, Guarino’s has stayed true to its tenets of quality food at reasonable prices. The original basement where “Mama Guarino” would prepare meals is still in existence and many of the original charm is present today. Some of the favorite meals are Chicken and Veal Parmesan, Lasagna(50 year old recipe), Scrod al Forno, Gnoochi Pesto, Brascole, Veal Saltimbocca and Frutti Di Mare.

Critically Acclaimed Michelangelo’s Italian Restaurant has been receiving great reviews for some time now thanks to the staff led by Executive Chef Michael Annadonno who has been recognized as one of America’s Best Chefs by Best Chefs of America (www.bestchefsamerica.com) and Michelangelo’s has been featured in Cleveland Magazine. Some of the featured entrees include Anatra Con Arancia E Grand Marnier, Ossobuco Con Risotto E Spinaci Fritti, Tangliolini Con Frutti Di Mare E Pomodoro Giallo, Tortelloni Di Porcini Con Funghi and the Raviolini Di Aragosta.

Since 2000, Marotta’s has been a staple of the Cleveland Heights Dining scene. Marotta’s has received numerous awards and accolades such as the 2002 Taste of Italy “Best Presentation” and many write-ups in the media. Some of their Award-winning entrees include the Florentine, Picatta, Saltimbocca, Olivia’s Pasta, Rosetto and the Shrimp Gremolata. Many of its patrons enjoy their Italian Wine Only list that features nothing but Italian wines.

One of the best restaurants in Lakewood, Pepper’s has a full line of Italian cuisine from pizzas to Spumoni. Despite the high quality of the food served, Pepper’s remains one of the most affordable Italian Restaurants in Cleveland. Some featured dishes are Chicken Marsala, Veal Piccata, Aglio y Olio, Pepper’s Signature Pasta, Gourmet Mac and Cheese with Langostino Lobster and the Margherita Pizza.

One of the most legendary establishments in Cleveland, Stancato’s remains a Parma standard in dining. In addition to their buffets and pizza, Stancato’s dinner entrees have been pleasing patrons for over 47 years. Some of the best dishes are the Shrimp Italiano, Mediterranean Di Mare, Gnochi Genovese, Pork Chop Luigi, and the Guiseppe Filetto. Other Featured entrees include the Seafood Ciapinno, Almond Crusted Cod and the Chicken Rapallo.

For over years, Carrie Cerino’s has been a hot spot for high quality Italian food as well as one of the area’s top banquet halls and bakery. They have outstanding programming throughout the year that keeps their dinner guests entertained and well fed. Some top choices include the Beef Short Ribs Osso Bucco Style, Mama Jo’s Fettuccine, Veal Scallopine Marsala, Lobster Tails, Chicken Sinatra, Surf and Turf and of course, Mama’s Lasagna.

One of the nation’s top Italian restaurant chains, Bravo has a very posh atmosphere and excellent food. The Beachwood location has one of the most popular Happy Hours in Cleveland. This is due to itas wide variety of appetizers and drink specials. Some of the featured entrees include the Chicken Caprese,Parmesan-Crusted Beef Medalions, Bravo!’s Grilled Pork Chop, Spicy Bay Scallop Marinara and Pasta Woozie.

One of the most posh places to dine in Cleveland, Giovanni’s is well known to have celebrities, professional athletes, politicians and corporate leaders frequent this iconic restaurant. I have personally bumped into Former Cleveland Cavaliers coach Mike Fratello in the parking lot while leaving. Since 1976, the best of Cleveland has enjoyed their exquisiste Italian cuisine. Some of the most recommended entrees are Cioppini, Veal Cannelloni, Linguini, Elysian Fields Lamb Loin Chops, Ohio Raised Bone In Filet Mignon and Milk Fed Veal Chop Parmigiano.

One of Mayfield Heights top restaurants, Piccolo’s is another excellent Italian establishment that everyone can enjoy regardless of budget. In addition to lunch and dinner, Piccolo’s has catering and private dining available. Some of their featured meals include Frutti Di Mare, Shrimp Maria, Pork Chop Alla Piccolo, Veal Milanese, Gnocci Rossa, Lamb Bolognese, Short Rib Agnolotti and many pizza pies such as the Margherita, Primavera and Tutto Carne.

Family Owned and Operated, Arrabiata’s focus on NOT being a “Chain” restaurant has earned its reputation as one of the prime spots for Italian food in the area. Like many of its competitors, Arrabiata’s has catering services for most events as well as take out selections when you want fine dining but don’t have time to sit down. Some top selections include Chicken Oscar, Mussels Possilipo, Veal Sicilian, Zuppa Di Pesce, Chicken Arrabiata, Twin Lobster Tails and Broiled Orange Roughy Arrabiata.

Celebrating 17 years of being in business in 2018, Gaetano’s has become a Mayfield Heights instituition when it comes to quality dining. Fresh ingredients and a calming environment have been instrumental in the continued success of Gaetano’s. Some of the most requested entrees here are the Steak and Shrimp Combo, Chicken Francaise, veal Marsala, Linguini & Shrimp Aglio, Cavatelli along with an assortment of sandwiches and pizzas like the Suasage Sub and the Sicilian Pizza.

One of the many things that separates Pastina from the rest is their insistence on using locally sourced beef and pork, chemical-free chicken and domestic seafood. This and high quality standards in operations has solidified Their spot as the premiere Italtian restaurant in Mentor. Some of the favorite dishes served include the Pastina Bolognese, Pesto Paillard, Short Rib Raviloli, Chicken Valdostana lli Luna Rosa.

One of the popular restaurants in Historic Downtown Willoughby, Pranzo has been receiving rave reviews from patrons and the media for a while now. The owners grew up in Cleveland’s Little Italy District and you can taste the heritage in every bite. Some of the top selections include Pappardelle Alla Caprese, Veal Marsala, Linguini and Clams, Mussels Marinara and Cavatelli Alla Romana.

MORE: Top 50 Things To Do in Cleveland Ohio