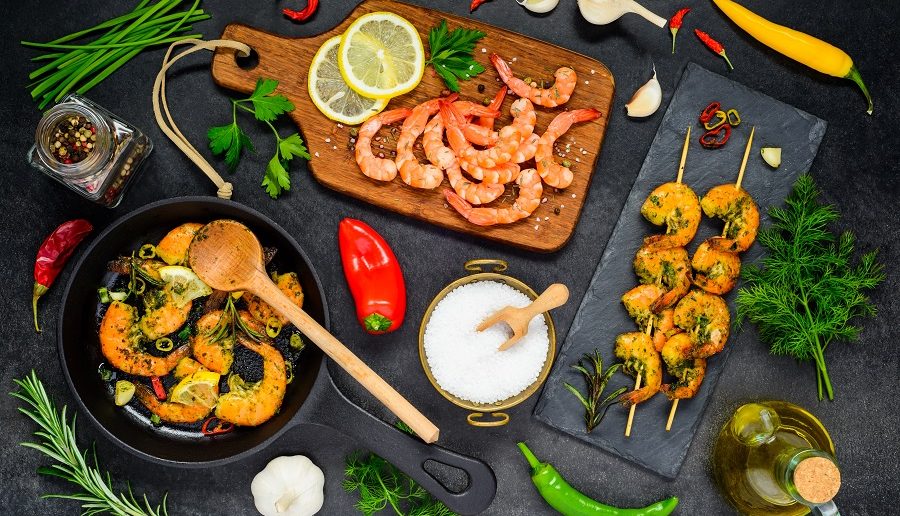 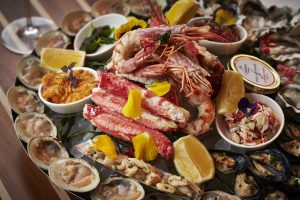 In the Greater Cleveland Area, people are serious about their seafood and dining out.  Bluepoint Oysters, crab legs, lobster, fried fish, jumbo shrimp, you name it, Cleveland area residents are eating it.  Clambakes are surprisingly popular in Cleveland and there are dozens if not hundreds of fish fry’s every Friday throughout the city.

For me, I love fried perch dinners and fish is my all-time favorite food.  I can and have eaten fish daily and in a perfect world I would wake up to fish and grits, a filet-o-fish sandwich from McDonald’s for lunch and a huge plate of fried flounder with mussels for dinner.  When The Cleveland Leader gave me this assignment, I was in heaven.  My wife loves her oysters on the half shell and has traveled all the way to Cincinnati just to go to Pappadeaux for seafood.

Unfortunately for her, they do not have a location here yet. Fortunately for everyone else, Cleveland has a plethora of seafood restaurants that can satisfy your urge for seafood.  If we miss your favorite spot, please email us and we will do our best to place it in our next edition of Cleveland’s Best Seafood Restaurants.  As always, we will list these spots based on your neighborhood.  Again, if we miss your part of town please let us know.

One of the premiere restaurants in town, The Blue Pointe Grille is where many men bring ladies to  woo them and many a marriage proposal and anniversary has been and continues to be made and celebrated in this exemplary establishment.  In addition to the Blue Pointe Oysters, some of the most recommended dishes here include the Grand Seafood Tower,  the Lobster Bolognese,  My Blue Pointe Heaven, Nags Head Grouper and the Surf and Turf.  The ambiance, extensive wine list and outstanding service are some of the reasons that The Blue Pointe Grill has been named Best Seafood Restaurant by Cleveland Magazine every year that it has been in business.  That in of itself is a lofty accomplishment and another reason to drop in.

The Nauti Mermaid has a Carribean-inspired menu an has become a Downtown Cleveland favorite.  In addition to tasty food, The Nauti Mermaid has weekly events and entertainment.  Some of the favorite meals served here are the Alaskan King Crab, Grouper, Cobia, the Perch Platter, Mahi, and the 202 Yellow Fin Tuna. These entrees and their delicious cocktails have contributed to their continued success.

A fusion of Spain and Portugal is the way to best describe the food and overall energy at Mallorca.  Over the years, Mallorca has one several awards including The Silver Spoon Award, Best Service and Cuisine and the Wine Spectator’s Award of Excellence.  Entrees such as the Filet De Salmon La Plancha, Camarones Con Vieras En Salsa De Champan, Saucetiapia Rellena, Paella Valenica and the Mar Y Tierra have kept Mallorca among the elite in Cleveland Restaurants.

Parallax fancies itself as an Asian Fusion restaurant as many of its entrees have a heavy Asian influence  and by looking at the menu that has sushi and Peking Chicken, you would wonder if Parallax should be considered a Chinese Restaurant.  However you slice it, Parallax is one of the hottest restaurants in town and is worth the visit.  Some of the top selections are the Bangkok Bouillabaisse, Tempura Lobster Tail, Miso Glazed Alaskan Black Cod, Loup De Mer, Crab Fritters and the Kuhlbarra Barramundi.

Having one of the most popular brunches in town, Pier W has been well know for its excellent food and service.  Having some of the freshest seafood in the region also does not hurt and is one of a myriad of reasons why Pier W continues to be packed every day and has a slew of awards such as the 2017 Open Table Diner’s Choice Award and the 2017 Scene Magazine Best Seafood Restaurant Award  Some of the most popular entrees patrons enjoy weekly are the Great Lakes Walleye Tempura, Pier W’s Famous Bouillabaisse, Pistachio Crusted Golden Trout, and the Hearth Oven Roasted Cedar Planked Salmon.

One of the city’s newest and hottest Seafood restaurant, Boiler 65 has enjoyed a meteoric rise among Cleveland’s seafood lovers.  Its Asian and Cajun fused approach has had mouths watering since its inception June 2017.  Some of the most ordered meals here are  The Duo Bag,  the Perch Dinner,  the Colossal King Crab,  Lobster Tail and the Shrimp by the pound, that you can dip in the O.G. Butter Sauce, Lemon Peppa or Bombdiggity sauce.

One of the most legendary establishments in town, Don’s Lighthouse Grille is literally Cleveland Restaurant History.  Originally Poshcke’s Barbecue, the building that houses Don’s Lighthouse Grille was a Cleveland legend and to this day the fine folks at Don’s Lighthouse Grille have maintained and added to the reputation and mystique of this structure known as “The Palace”.  Some of the favorite entrees include the Portuguese Seafood Stew, Maine Lobster Tail, Carolina Catfish, Rainbow Trout,  Faroe Island Salmon, and the Nantucket Lightship Scallops.

One of the most celebrated and award winning restaurants in the area, Salmon Dave’s Pacific Grille has been delighting  customers since 1993.  In addition to having phenomenal food, events such as Taste of N’awlins and the Maine Event Lobster Feast help maintain their buzz.  Executive Chef Mario Brown has been at the helm for a long time is one of the primary reasons for Salmon Dave’s sustained success. Entrees such as the Pan Seared Black Grouper, Salmon Dave’s Lo Mein, Dave’s Signature Salmon, Maine Lobster Pasta and the Filet Oscar are local favorites.

One of the newest restaurants in the iconic Conventry distrist, Seafood Shake is a place where you can get have a “hands on” experience with your meal.  Imagine crab legs, mussels,shrimp and lobster in a bag with seasoning and the server presents you with gloves and says “have at it!” This is exactly what you will experience at Seafood Shake.   If you want a unique dining experience, this is the place.

A Cleveland Heights Staple, Boiling Seafood Crawfish believes in liberal servings of its seafood.  Some of the offerings include The Handful, The Ultimate, and Temptations by The Pound which refers to shrimp,clams, mussels, Snow Crab and King Crab Legs you can order. If you want the get the most seafood for your dollar, Boiling Seafood Crawfish is definitely one of the most cost-effective restaurants in town.

Primarily a Takeout Restaurant, John John’s has grown in popularity rather quickly and has opened up a 2nd location in Cleveland Heights.  Alot of people have flocked to John John’s thanks to the Uber Eats App and have been pleasantly surprised by their excellent seafood.  Some of the most ordered dishes have been the T-Bone Steak and Scampi Dinner, Perch Dinner, Red Snapper, Orange Roughy, Shrimp Quesadilla and the Garlic Shrimp Dinner.  They still operate their first location in East Cleveland.

XO is one of Cleveland’s most upscale restaurants. Known primarily for its steaks, XO Seafood and Lobster’s focus is on seafood and like their steaks, XO’s acumen for making topnotch seafood does not disappoint.  Some of the most requested entrees include the Five Pepper Seared Ahi Tuna, Pan Roasted Chilean Sea Bass, Blackened Lacquered Salmon, Butter Poached Lobster Tail and the King Crab Legs.

And like the location downtown, you never know which celebrity may walk in for a bite to eat.

Mitchell’s Fish Market is one of the best places in town to enjoy seafood.  This is due to having some of the freshest fish, shrimp and seafood in the region.  Mitchell’s has enjoyed outstanding reviews from the most discriminating Seafood lovers despite being a chain restaurant.  Some of the top selections include the New Orleans Seafood Gumbo, The Perfect Pair, P.E.I. Mussels Provencal, Shangai Shrimp+Salmon+Sea Scallops and the Mitchell’s Market Trio, which is my favorite.

From personal experience, I will state that Bonefish has the best mussels in Cleveland.  One of the best overall restaurants in town, Bonefish Grill prides itself on great service, fresh ingredients and diverse offerings. Some of the top entrees are the Norwegian Salmon, Chilean Sea Bass, Tilapia Imperial, Pecan Parmesan Crusted Rainbow Trout, Cold Water Lobster Tails and the Ahi Tuna Steak.

One of the most iconic restaurant chains on earth,  Red Lobster has been one of the most loved and respected seafood restaurants in the area for decades.  From its Endless Shrimp, CrabFest and Lobsterfest, Red Lobster has been able to endure due to its outstanding service and classic food. Some international favorites have been the Seaside Shrimp Trio, Ultimate Feast, Bar Harbor Lobster Bake, Dragon Shrimp and the Rock Lobster and Steak.  Even though you make your own Cheddar Bay Biscuits at home, they will never match the original you receive at the restaurant.

Another legendary chain, Long John Silver’s remains a national favorite. Who still rings the bell after you are done and walking out the door?  I along with many Clevelanders still make it a habit to stop by for some hush puppies and fish whenever I pass one by. Some favorites include the Fish Baskets, Catfish Platters, Variety Platters and I always add a piece and you should too.

One of the oldest restaurants in the city, Sussex has been a Wickcliffe staple and is one the most notable and recognized restaurants in the region.  Originally located on Hayden Avenue, the family moved the restaurant to Wickcliffe in 1969.  Some of the top choices include the Famous Fish, Lake Perch,  Alaskan Snow Crab, Strip Steak and Lobster Tail, Jumbo Sea Scallops and the Shrimp Salad.

One of the more eclectic establishments in the area, Fusions pairs classic soul food with many of your favorite seafood standards.  One of the only places where you can enjoy Chicken and Waffles or a Scampi Dinner.  Some of the area’s most requested dinners are the Perch Dinner, Catfish Dinner, Lb’s Jumbo Shrimp Dinner, the 3 Perch and 4 Shrimp Combo and Fusion’s Big Fish Friday where you can get a pound of fish with fries or slaw for $11.99.

One of Ohio’s most historic structures, the building that Brennan’s Fish House has been open since 1865.  Originally it was the Richmond Inn. It has since evolved into Evan’s Lunch , Then Harry’s and in 1973 it became Brennan’s Fish House, which was purchased by Sharon and Steve Hill in 2009.  Along with a rich history, Brennan’s Fish House has great food.  Some of the local favorites are the Fresh Lake Walleye, Fresh Lake Erie Yellow Perch, Orange Roughy, Fisherman’s Platter, Bouillabaisse, Delmonico Steak and Shrimp and the Super Clam Strips.  You definitely want to stop by and hear about the legend of “Pearl” who was one of the most colorful people who graced Brennan’s Fish House.