You are at:Home»Entertainment»Cleveland Auto Show 2019 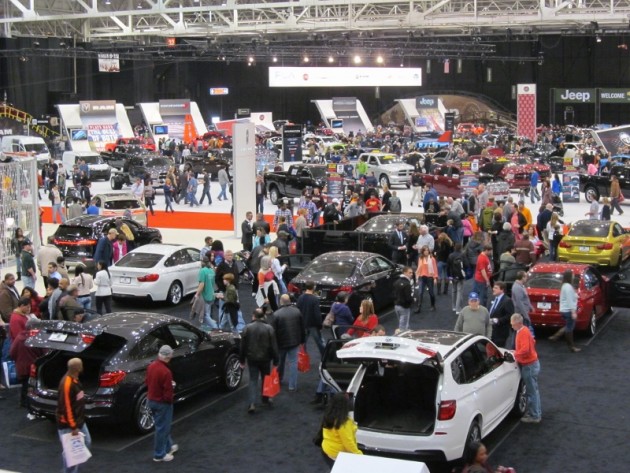 Since 1903 The Cleveland Auto Show has been entertaining Cleveland residents of all ages.  The Auto Show  has been known  to display a multitude of pre and post production, classic, concept and iconic cars from Hollywood as well as hosting many celebrity guests that continues to draw fans consistently to the I-X Center.  In addition, there are numerous interactive activities and programs that help usher in the official selling season for the Automotive Industry. With over 1 million square feet of showroom space, the Cleveland Car Show is a paradise for car enthusiasts.

The First Cleveland Auto Show was held at Gray’s Armory in 1903 where 15 Cleveland made vehicles were on display along with a plethora of other manufacturers.  At the time Cleveland was a major hub for the Automotive Industry with 4 carmakers based in the city. Names like White, Jordan and Peerless, are in the anals of the United States Automobile sector as big names prior to Detroit being crowned The Motor City in 1908. Today the Car Show is held every year at the I-X Center.

For over 100 years the Cleveland Auto Show has and continues to display various attractions.  No matter what era, the Car Show’s attractions and features remain fun, interactive,  visually satisfying and for some profitable.  The Classic Car Competition for example has been going on for over 18 years.  Participants enter their vehicles which have to be 25 years or older for a chance at the grand prize of $500.

Every person in the contest receives a commemorative dash plaque.  Millionaire’s Row shows off cars that are valued at $1M U.S. And up. Some of the past vehicles displayed have been the Aston Martin DB11, the Porshe Macan GTS and the Rolls Royce Wraith Black Badge.  Each year the Cleveland Car Show does a drawing for a new car. On the last day of the Auto Show the winner is announced and is given the keys to a new automobile.

The Ride and Drive exhibits gives Car Show attendees the opportunity to test drive many of the new cars that are coming out on the open market.  To participate, driver must have proof of insurance, driver license, sign a waiver, in some cases pass a breathalyzer and give additional background info.  This is one of the biggest draws to the Car Show.  There are a variety of special features at the Car Show for fans to partake in.

The Virtual Reality simulators allow you to drive various vehicles in many scenarios. The Jeep Rock Climb, Coloring contest,  Hyundai Game show and the Cavaliers Jeep are a handful of enticements for Auto Show fans.

The 2019 Cleveland Auto Show has tickets for sale now online if you want to beat the rush and bypass the long lines that will inevitably form as they have for many generations. The dates for the 2019 event are February 23 – March 4th taking place at the IX Center.  If you are novice or die hard automobile expert, The Cleveland Auto Show is a must.  Be sure to attend this upcoming February as the Auto Show is a great family event.  You will not be disappointed.