You are at:Home»Sports»Cleveland Browns Mascot Chomps 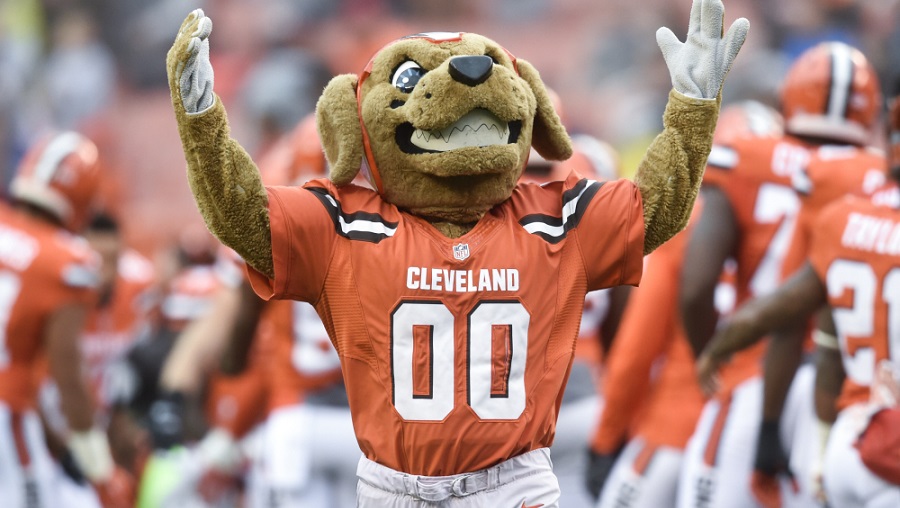 Chomps is one of three official mascots for the American National Football League (NFL) team, the Cleveland Browns. The Browns play their games at First Energy Stadium on the coast of Lake Erie in Downtown Cleveland, Ohio.

The second newest mascot, Chomps, being introduced sometime in the late 2000s approximately, is listed as a Labrador on ClevelandBrowns.com, standing 6’1” and weighing 195 pounds.

Chomps sports the number 00 and his home is listed as ‘The Dawg Pound.’

The Dawg Pound is the name of the bleacher section behind the east endzone at First Energy Stadium and is home to some of the most passionate Browns fans Cleveland has to offer.

The idea of ‘The Dawg Pound’ formed in 1985 with the help of then Browns cornerback Hanford Dixon had the thought of naming the cheapest seats, which normally meant the loudest fans, ‘The Dawg Pound.’ The name came about with the thought in mind that Dixon and his teammates referred to their defense as ‘The Dawgs.’

Dixon’s nickname for the east bleachers stuck and has been a major part of the Browns identity since.

Chomps shares the title of ‘official mascot’ with two other mascots for the Browns. Their first is the recently reincarnated ‘Brownie the Elf’ who spawned in the early ‘40s after being adopted by then owner Arthur McBride who used ‘Brownie’ to give the Browns a recognizable image that could be used for advertisements.

Brownie the Elf made its debut in an ad for tickets for the 1946 season opener against the Miami Seahawks.

When former owner Art Modell took over the team in 1961, Modell started to phase out the beloved mascot after it being reported that he hated the elf and was embarrassed by its childish looks. When the Browns returned to Cleveland in 1999 after being moved to Baltimore in 1995, former owner Randy Lerner made a big push to bring back Brownie and incorporate him back into the organization’s image.

Chomps’ second counter-part was just introduced to the world in 2014 after the Browns announced that they would host a live bull mastiff on the sidelines who would serve as their newest mascot. The Browns named him ‘Swagger’ and he has been present on the sidelines of every Browns home game since.

Even though the Browns hold three different mascots at their disposal, Chomps is by far their most active in the community.