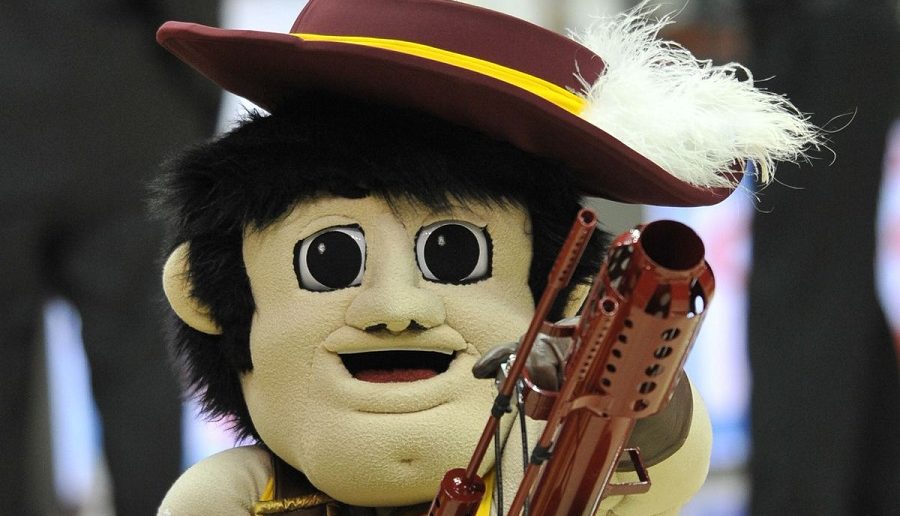 The seven-year-old mascot debuted for the Cavaliers on November 27, 2010 in a contest against the Milwaukee Bucks.

Although Sir CC made his official debut in 2010, Cavaliers officials swear that CC has been around since the start of the Cavaliers back in the 1970s as you can see a character close to his depiction in early logos of the 2016 NBA Champion’s history.

The newest of the two mascots is a giant Cavalier with a swashbuckling sword and an overly ginormous clad hat. He resembles one of the three musketeers.

Sir CC’s counterpart Moondog makes up the other half of the Cavaliers’ mascot duo and is looked at as the more athletic mascot of the two.

The newest mascot for the Cavaliers came to fruition in 2010 after Cleveland had been mulling over the idea of adding a second mascot, something that most of the 29 other NBA teams do not have.

After several designs were submitted to the Cavaliers, after having to follow close to strict directions for what they wanted their new mascot to not only represent but look like as well, the winning design was submitted by Avant Garb, an Indianapolis-based company which has designed several mascots around the sports world.

Sir CC’s original debut was supposedly scheduled for Halloween Night 2010 but was delayed when the licensing agreement with the Cavaliers and the NBA was still not done.

Cleveland also felt that it was a better decision not to debut their brand-new mascot on the same night as the Cavaliers’ home-opener as there was concern that he would get caught up and ultimately lost in the all of the activities that come with a new season.

The reception from fans and the NBA world has been mixed to say the least about Sir CC. In Bleacher Report’s 2011 NBA Mascots ranking Sir CC was ranked the 20th best mascot in the league.

As all opinions on such matters as mascots are arbitrary, Sports Illustrated, in their 2016 “Ranking the NBA’s Mascots,” ranked Sir CC at number eight in the Association saying he and Moondog are “not quite LeBron and Kyrie, but Moon Dog and Sir CC are a solid duo in Cleveland. And they’re leagues ahead of the Indians’ mascot, Slider.”

Sir CC also joined the Cleveland Browns’ mascot, Chomps, at the 2017 Mascot Games this past July in Orlando, Florida. Multiple mascots competed in front of 18,000 fans, competing in competitions such as jousting and dancing.

Sir CC, back in 2016, was also a part of the Ohio State Fair’s butter display competition where artists sculpt large amounts of butter into artwork. CC was one of those sculptures, along with Moondog, which took about 2,150 pounds of butter and was completed in approximately 500 hours.

The sculptures were a celebration of the Cavaliers’ & LeBron’s historic 2016 NBA Finals Championship where they came back from a three-game to one deficit against the Golden State Warriors.

Check out these other great Cleveland Sports Teams Mascots: