You are at:Home»Sports»Slider the Mascot – Cleveland Indians 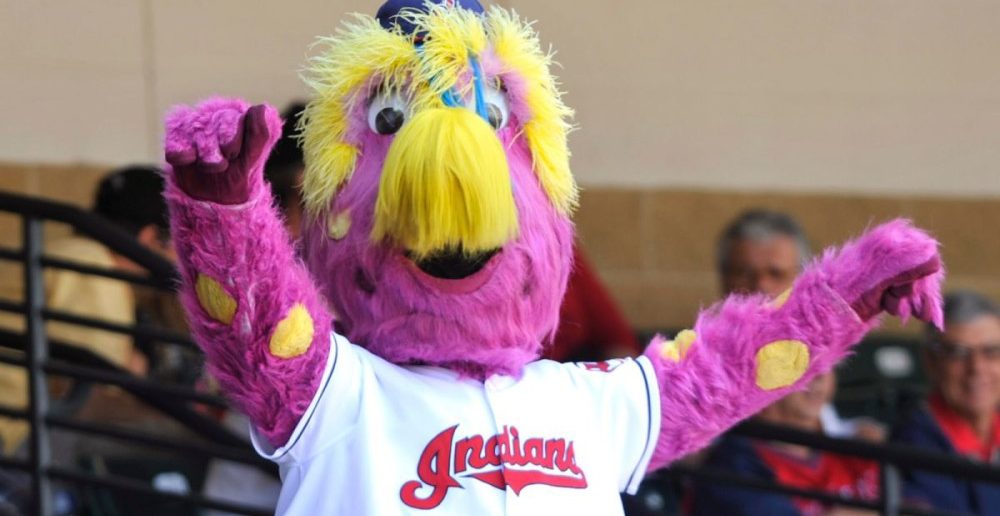 Slider the Mascot for the Cleveland Indians

Slider is the official mascot of the American Major League Baseball (MLB) team, the Cleveland Indians.

Slider has no official height but is listed as “Really Up There!” by the Cleveland Indians website as well as listing “You Don’t Really Want to Know…” for his weight.

The Indians mascot was created in 1990 and was created with inspiration from the Philadelphia Phillies mascot, The Phillie Phanatic. Slider is the first official mascot of the Indians sports team.

He is a large fuchsia-colored creature with a big, fluffy, yellow nose and yellow eyebrows who was born on July 29, 1990 and resides “Somewhere Underground Behind Home Plate at Progressive Field” according to the team.

Slider is most known, or remembered, for his mishap during Game 4 of the 1995 American League Championship Series when he fell off of the right field dugout, onto the playing field after a somersault went wrong.

The fall caused Slider to completely dislocate his knee as well as tear every ligament up and down his leg.

Slider would return for the introductions of Game 5 in a cast and bandages and returned to a complete standing ovation from the Cleveland crowd.

The 27-year old Indians mascot might also be remembered for his appearance in Major League II. A cult favorite that started in the late ‘80s with a sequel coming in 1991 that featured the Cleveland Indians as a “worst-to-first” team that comes together in the strangest ways baseball has ever seen. Slider can be seen cheering the Tribe on from the seats in the film.

Cleveland’s only official mascot is held in high regards in the professional mascot world. Slider became only one of three MLB mascots to be inducted into the Mascot Hall of Fame after his induction in 2008. He joins the New York Mets mascot “Mr. Met” and the Phillie Phanatic.

In 2015, Slider and the Indians organization thought that the fuscia-colored… whatever he is, got snubbed by ESPN by not including him in their “Body Issue,” posting his own “Body Issue” submissions on twitter.

The Indians went on to tweet at ESPN saying, “Hey @ESPNMag — @kevinlove looked great, but did you lose the pics @SlidertheMascot sent you? http://atmlb.com/1dM44P3.”

After their ESPN tweet, they followed up by tweeting at Sports Illustrated saying, “Hey @SINow — want to get back in our good graces? Include Slider in Swimsuit 2016. Look at that body!”

The “good graces” the Indians are referencing is the ongoing idea that “SI” jinxed the Tribe in 2015 after naming them the World Series Champions in their spring training issue.

Slider recently celebrated his 25th birthday on July 26, 2015 at Progressive Field. He was joined by various mascots throughout the MLB including; “Ace” of the Toronto Blue Jays, “Gapper” of the Cincinnati Reds, “Orbit” of the Houston Astros, “Paws” of the Detroit Tigers, the “Phillie Phanatic,” “Screech” of the Washington Nationals and the Oakland Athletics mascot “Stomper.”

Slider lists drums as his favorite instrument. This is because of fan-favorite John Adams who has been banging on the drum in the bleachers since 1973.

Cleveland’s furry mascot will be entering his 28th season as the Indians’ mascot.