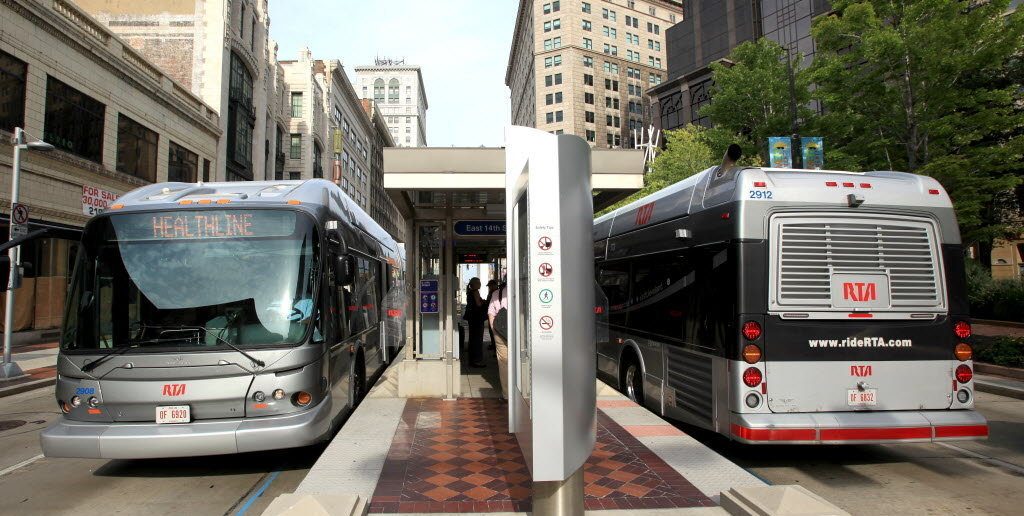 The Greater Cleveland Regional Transit Authority (RTA) has been keeping Clevelanders moving for many generations.  Public Transportation has an incredibly long and storied history in Cleveland.  The RTA through its dozens of buses and trains help approximately 150-200,000 people travel on any given day in the Cleveland Area.  Over the years, the RTA has evolved to meet the new transportation needs of the public and has been apart of some of America’s trailblazing moments in travel history.  With service to and from Cleveland-Hopkins Airport, Downtown Cleveland and many surrounding cities and attractions, RTA is a lifeline for Cleveland.

During the Great Depression, Ridership ballooned to 299 million and during World War II ridership shot up to 446 million in 1946.  The Trsikett Bus Garage was opened in 1958 and the RTA was officially started in 1974.  This was due to the consolidation of CTS’s assets which previously ran public transportation and the combining of Cleveland Shaker Rail systems.   Back then the bus fares were 25 cents for local, 35 cents for express.  Discounted fares for students and seniors were 13 cents.

In 1979 RTA began a $100 Million reconstruction of the rail systems.  In 1988 RTA began to equip buses with wheelchair lifts and in 1989 acquired 77 air-conditioned buses. 1990 was a huge year for RTA as it opened its first Park and Ride Center in Strongsville and a new $60 million dollar station at Tower City.  Vice President Dan Quayle rode the Red Line from Cleveland-Hopkins Airport to Downtown.

In 1995 RTA debuted its first website and celebrated its 20 year anniversary.  In 2002 RTA sent bus drivers to the Winter Olympics in Salt Lake City, UT. In 2004 RTA purchased several environmentally RTVs(Rapid Transit Vehicles) from New Flyer of America Inc. In addtition, RTA broke ground on its $200 Euclid Corridor Transportation Project and was aknowledged nationally for its American Red Cross Campaign A Pint for a Pint. In 2005 RT Celebrated 50 Years of Red Line Service and in 2007 RTA installed cameras of buses and trains for increased security for riders.

In 2011 RTA and Cleveland State University started the Public Transit Management Academy and in 2013 RTA introduces the Hydrogren Fueled bus.  In 2017 RTA dedicated a new Lee-Shaker Station on the Green Line and extends service from 9pm-12am seven nights a week.

RTA has been one of America’s best and most reliable public transportation systems.  With a plethora of steady improvements, innovations and community projects, RTA has been on of the city’s primary assets.