You are at:Home»News»Dennis Kucinich Explains Why He Voted No On Affordable Health Care for America Act

Cleveland area Congressman Dennis Kucinich has long been one of the strongest voices for health care for all but was one of 36 Democrats who voted no on H.R. 3962 the Affordable Health Care for America Act. Kucinich explained his “no” vote on his website that read: 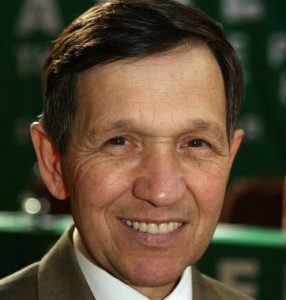 “We have been led to believe that we must make our health care choices only within the current structure of a predatory, for-profit insurance system which makes money not providing health care. We cannot fault the insurance companies for being what they are. But we can fault legislation in which the government incentivizes the perpetuation, indeed the strengthening, of the for-profit health insurance industry, the very source of the problem. When health insurance companies deny care or raise premiums, co-pays and deductibles they are simply trying to make a profit. That is our system.

“Clearly, the insurance companies are the problem, not the solution. They are driving up the cost of health care. Because their massive bureaucracy avoids paying bills so effectively, they force hospitals and doctors to hire their own bureaucracy to fight the insurance companies to avoid getting stuck with an unfair share of the bills. The result is that since 1970, the number of physicians has increased by less than 200% while the number of administrators has increased by 3000%. It is no wonder that 31 cents of every health care dollar goes to administrative costs, not toward providing care. Even those with insurance are at risk. The single biggest cause of bankruptcies in the U.S. is health insurance policies that do not cover you when you get sick.

“But instead of working toward the elimination of for-profit insurance, H.R. 3962 would put the government in the role of accelerating the privatization of health care. In H.R. 3962, the government is requiring at least 21 million Americans to buy private health insurance from the very industry that causes costs to be so high, which will result in at least $70 billion in new annual revenue, much of which is coming from taxpayers. This inevitably will lead to even more costs, more subsidies, and higher profits for insurance companies — a bailout under a blue cross.

“By incurring only a new requirement to cover pre-existing conditions, a weakened public option, and a few other important but limited concessions, the health insurance companies are getting quite a deal. The Center for American Progress’ blog, Think Progress, states “since the President signaled that he is backing away from the public option, health insurance stocks have been on the rise.” Similarly, healthcare stocks rallied when Senator Max Baucus introduced a bill without a public option. Bloomberg reports that Curtis Lane, a prominent health industry investor, predicted a few weeks ago that “money will start flowing in again” to health insurance stocks after passage of the legislation. Investors.com last month reported that pharmacy benefit managers share prices are hitting all-time highs, with the only industry worry that the Administration would reverse its decision not to negotiate Medicare Part D drug prices, leaving in place a Bush Administration policy.

“During the debate, when the interests of insurance companies would have been effectively challenged, that challenge was turned back. The “robust public option” which would have offered a modicum of competition to a monopolistic industry was whittled down from an initial potential enrollment of 129 million Americans to 6 million. An amendment which would have protected the rights of states to pursue single-payer health care was stripped from the bill at the request of the Administration. Looking ahead, we cringe at the prospect of even greater favors for insurance companies.

“Recent rises in unemployment indicate a widening separation between the finance economy and the real economy. The finance economy considers the health of Wall Street, rising corporate profits, and banks’ hoarding of cash, much of it from taxpayers, as sign of an economic recovery. However in the real economy — in which most Americans live — the recession is not over. Rising unemployment, business failures, bankruptcies and foreclosures are still hammering Main Street.

“This health care bill continues the redistribution of wealth to Wall Street at the expense of America’s manufacturing and service economies which suffer from costs other countries do not have to bear, especially the cost of health care. America continues to stand out among all industrialized nations for its privatized health care system. As a result, we are less competitive in steel, automotive, aerospace and shipping while other countries subsidize their exports in these areas through socializing the cost of health care.

“Notwithstanding the fate of H.R. 3962, America will someday come to recognize the broad social and economic benefits of a not-for-profit, single-payer health care system, which is good for the American people and good for America’s businesses, with of course the notable exceptions being insurance and pharmaceuticals.”

Check out this guide to Ketosis and the Ketogenic Diet