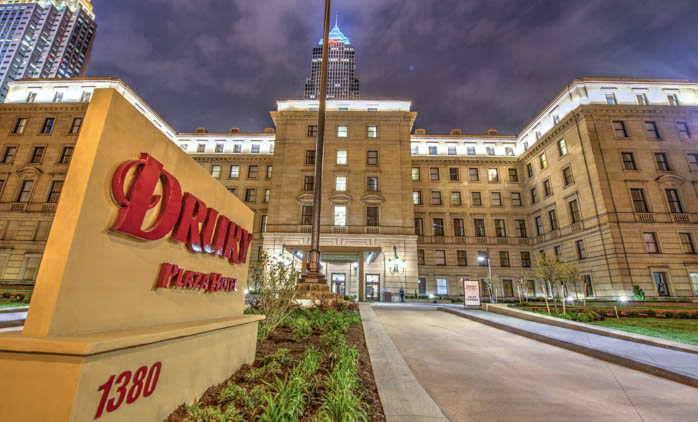 The Drury Plaza Hotel is centrally located in the heart of Downtown Cleveland. First Energy Stadium, Progressive Field, Quicken Loans Arena, The Wolfstein Center, Jack Casino and Playhouse Square are within walking distance. The Flats, Tremont and Ohio City are a 2-5 min Uber and/or Lyft ride away. This makes The Drury Plaza Hotel an excellent choice for tourists and locals who want to paint the town red for the weekend.

Originally built in 1931, The Drury once housed the City of Cleveland’s Board of Education. Acquired by Drury in 2014, this hotel was given a full renovation at the tune of $5.3M. The Drury Plaza successfully retained a large amount of its charm from a era long gone. If you wink Your eyes, you would swear Bob Feller and the 1948 World Champion Cleveland Indians just past you in the lobby. Drury has maintained the Marble floors, Original elevators(with 2017 upgrades) and original artwork that many Government Buildings tend to have in the 1930s and 1940s.

In addition to its classic charm, the Drury Plaza Hotel has most of the amenities you would expect from a Downtown Hotel such as indoor heated pool and spa, free wifi, swank lounge areas(My favorite is The Teacher’s Lounge, which would be an educator’s dream place to unwind between classes), business centers, and rooms that are flushed with Cleveland-Themed Artwork and Photography along with custom bedding, flat screen TVs and appliances.

Many of the rooms have views of Dowtown Cleveland that are breath-taking. 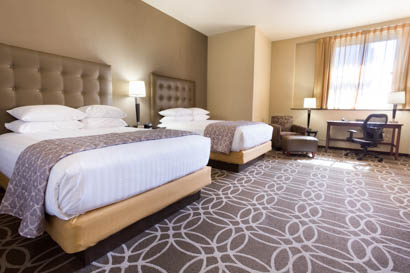 The Drury’s biggest strength is arguably its largest drawback. The vibe of a municipal building is inescapeable. Attorneys, government workers and politicians would go nuts staying here as it would remind them of their job. If many government officals had their way, they would have their staff live at work and The Drury Plaza Hotel would be that dream fully realized. The meeting rooms have tables and chairs you would see in a classroom. Staying true to the Public School building theme is appreciated but The Drury Plaza went too far some aspects. The Presidential Suite for example tries to capture the energy of the Situation Room with a board room meeting table in the middle of the room, but falls short as the decor make it look like the library it used to be. The concept was good but the Drury could have made it more luxurious considering the $500 a night price tag.

Overall, The Drury Plaza Hotel is somewhere I would love to stay and should be a required stop when visiting Cleveland.

Unlike many of the hotels downtown, The Drury Plaza is unique because it is a textbook example of how Cleveland has repurposed its old buildings such as the New Heinens Grocery store that used to be The Cleveland Trust Building(another tourist attraction that is within walking distance of the hotel!). Friendly and professional staff are at your beck and call, valet parking and free meals for all registered guests help sweeten the deal. With the average nightly stay starting at $125, The Drury Plaza is an outstanding value for all of its offerings.