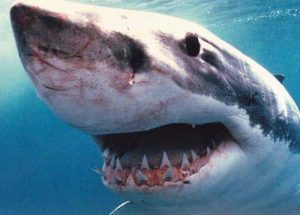 Triathelete David Martin, 66, died on Solana Beach Friday after a shark lifted him out of the water with his legs in its jaws, which left deep lacerations and shredded Martin’s wetsuit. Helicopters continue to scan the coastline in search of the shark, which is believed to be a great white shark, that killed Martin.

According to city and county officials, beaches in San Diego will remain closed, and will be patrolled throughout the weekend.

While the weekend weather forecasts promises dry winds and summery temperatures, tempting weather to head to the beach, those thousands who would normally make a beeline for the beach will now have to weigh the risks of ignoring authorities and risking their lives to take a dip in the ocean.

David Martin was the first shark fatality in San Diego County since 1994. Before that, the last known fatal shark attack in the area was in 1959.

Experts indicate that the likelihood of finding the shark that attacked Martin, a retired veterinarian, was slim.

Sharks are a rare occurrence in SoCal, however, female great white sharks occasionally swim south to pup. Experts believe that the bite pattern on Martin’s legs indicate that the shark was a great white that was 12 to 17 feet long.