You are at:Home»News»Former Congressman Tom Tancredo Says Obama Won Because There is No Literacy Test Before Voting 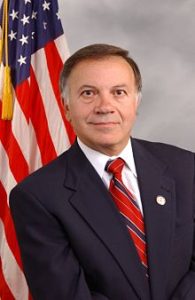 Former Rep. Tom Tancredo (R-Colo.) was the opening speaker at the first National Tea Party Convention on Wednesday evening, and what he said is likely to not only raise eyebrows but also anger many Americans. He called President Barack Obama a “committed Socialist idealogue” who was elected because “we do not have a civics, literacy test before people can vote.”
Speaking before about 600 delegates of the grassroots movement at the Gaylord Opryland Hotel in Nashville, Tenn., Tancredo said, “You have launched a counter-revolution.”
Insisting upon using Obama’s middle name, Hussein, the former congressman also said that he was thankful that Republican Senator John McCain of Arizona lost the presidential election in 2008 because Obama’s win had mobilized an uprising.
He continued:
“People who could not even spell the word ‘vote’ or say it in English put a committed socialist ideologue in the White House.”
Tancredo also had a failed bid for the presidency in 2008, and built a reputation on his vehement opposition to illegal immigrants. The literacy tests of which he spoke about during his speech this week were actually once used in our country’s history in South to prevent blacks from voting.
While many regard Tea Party followers as a sort of fringe group, they played a role in getting out the vote for Scott Brown, the Republican who last month took the Massachusetts Senate seat that had been held by Democrat Ted Kennedy for the past four decades. Furthermore, it is believed that they will play an important role for Republicans who seek to gain more seat’s in Novembers congressional midterm elections.
The convention ends on Saturday evening with a speech by former Alaska Governor Sarah Palin. Attendees paid $549 for access to two whole days of events at the convention. Some of the sessions planned for Friday included titles such as “Why Christians Must Engage” and “Defending Liberalism Via the Primary Process.”
Attendees seemed to be comprised of those who are looking defeat anyone who has been in Congress too long, regardless of their political affiliation, and those who want to get conservative Republicans back in office.

Share. Twitter Facebook Google+ Pinterest LinkedIn Tumblr Email
Previous ArticleCoulier Comes Clean: He Admits to Being the Muse Behind Alanis Morissette’s ‘You Ought to Know’
Next Article Full Video and Transcript of Town Hall Debate Between Barack Obama and John McCain