You are at:Home»News»Heinz Redesigns its Ketchup Packets for the First Time in 40 Years 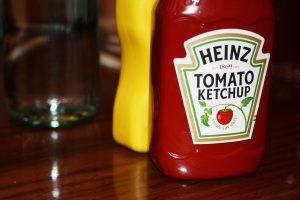 After forty-years, Heinz is finally revamping their ketchup packets to make eating on-the-go easier. While the traditional packets will still be sold, Heinz has already begun placing the new packets in test markets in the Midwest and Southeast. The new packets will also roll out at select fast-food restaurants in the fall.
Heinz sells more than 11 million cases of ketchup packets in the United States alone each year, and have long struggled to find a design that would allow diners to dip or squeeze ketchup that they could also sell at a price acceptable to restaurants who buy them. Two years ago, Heinz gave its design team a used minivan to see if their ideas would really work while dining on the road.
The results of all the company’s testing and innovation is seen above. The new packet will allow the diner to have the option of either dipping or squeezing the ketchup, and features a base that is more like a cup for dipping and a tear off end for squeezing. An added bonus is that the new packet holds three times as much ketchup as its traditional packet, which for consumers means you won’t have to squeeze out six packets just to go along with your fries or try to figure out where to squeeze it if you prefer to dip your fries rather than douse them in ketchup.
While Heinz is still working out pricing with its customers, they did say that it will cost a little more than their regular packets. It’s hard to say if the new packet will catch on, but Heinz has long has complaints about its traditional ketchup packet, so the new design is likely to have its fans.
Dave Ciesinski, vice president of Heinz Ketchup said:

“The packet has long been the bane of our consumers. The biggest complaint is there is no way to dip and eat it on-the-go.”