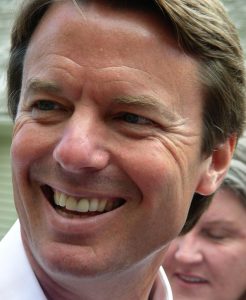 The alleged payoffs to keep her mouth quiet must have finally curtailed, and now John Edwards’ mistress is back in the limelight. Rielle Hunter, the longtime secret lover of the 2-time presidential candidate and former North Carolina senator, is now demanding proof that Edwards is the father of her 14-month-old daughter, Frances.
According to the National Enquirer, which originally broke the news of Edwards’ affair long before he admitted to it, Hunter is working with a lawyer to take legal action.
The affair between Edwards, who is married, and Rielle Hunter, a divorcee, was first exposed in late 2007. Hunter gave birth to Frances in February 2008. John Edwards has long maintained that he is not the father of her baby, but no paternity testing has been done to prove it either way.
The Enquirer now says that Hunter’s sudden move to determine paternity, which she had refused to do before, is a clear sign that she’s no longer willing to protect Edwards.
A source told the magazine:

“Rielle – probably naively – now realizes she had held onto a false promise that if she continued to take part in the cover-up John had engineered, they’d be together in the future,” a close source told The ENQUIRER.
“She was willing to protect John for the sake of the child. She agreed to allow a crony of his to claim he was the baby’s father, and she even kept the name of the father blank on the birth certificate.
“But now she can see there’s never going to be a future with John – and she feels he’s lied about his promise to keep Elizabeth from trashing her in the book,” the insider divulged.
“Rielle is so infuriated by his and Elizabeth’s actions that she’s throwing her loyalty to him out of the window!”

Edwards is currently being investigated by the federal government for possible misuse of campaign funds, which are alleged to have been used as hush money to pay off Hunter. His wife, Elizabeth, really laid it into Hunter in her newly released book, which has also infuriated Hunter.
The source continued:

“Rielle wants the paternity of her daughter Frances finally established. It could ruin John for good because even after admitting the affair, he vehemently denied being the father!”