You are at:Home»Sports»Manny Ramirez Biography

By Christian Reynolds on January 5, 2018 0 Comments

The Life & Career of Manny Ramirez

Manny Ramirez is a baseball player born in Santo Domingo, Dominican Republic on May 30, 1972.

At the age of 13, Ramirez moved to the Washington Heights neighborhood of New York City. Although he lived in New York, Ramirez would root for the Toronto Blue Jays and would watch his “Jays” every time they came to the Big Apple.

Ramirez attended George Washington High School from 1987 to 1991, and was named New York City Public School Player of the year in 1991 after hitting for a .650 batting average, accumulating 14 home runs over 22 games.

Manny would leave George Washington High after 1991 without graduating and entered himself into the Major League Baseball draft. 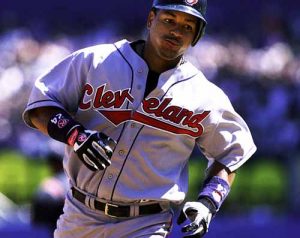 In 1991, the Cleveland Indians would select Ramirez with the 13th pick of the draft and assign him to their Rookie-level team, the Burlington Indians. He was named 1991 League MVP after raking in 62 runs-batted-in (RBI) and 19 home runs in 59 games.

After moving through the ranks from Rookie-Ball all the way to Double-A ball, Ramirez would make his Major League debut only two years after he was drafted, on September 2, 1993.

Ramirez would debut against the Minnesota Twins, going hitless in his four at-bats while taking up the Designated Hitter position in the lineup.

The next day, Manny would find his first home run, and his second against the New York Yankees. He would finish his second ever game in the Bigs, going three for four with two home runs.

In his first full season of professional ball in 1994, it was apparent that Ramirez was not just some kid from the Dominican that could play baseball. He was a star. He would finish second in Rookie of the Year voting after posting a .269 batting average while raking in 60 RBI and 17 home runs in 91 games. This was a strike-shortened year in Major League Baseball where they saw the season come to close in August.

The 1995 season was his breakout season where he found himself the recipient of his first career Silver Slugger Award and an All-Star Game selection. On the season, he batted .308 with 31 home runs and 107 RBI.

The following off-season he would sign a four-year, $10.15 million contract with the Indians.

During his time in Cleveland, Ramirez was thought of as one of the most feared bats in baseball. He was also part of the Indians’ “90s dynasty” that put together maybe one of the greatest lineups to never win a World Series (see the Cleveland Sports Curse for more), made up of the likes of Jim Thome, Albert Belle, Sandy Alomar Jr, Omar Vizquel, Kenny Lofton and Ramirez. From 1993-2000, Ramirez posted a .313 batting average while hitting 236 home runs and driving in 804 runs.

In November 2000, Ramirez would turn down the Indians’ offer of seven years, $119 million which would make him the highest paid player in baseball. He instead signed a ten year, $200 million contract with the Boston Red Sox and the Cleveland Indians Stadium was his home no more.

During his time in Boston, he was absolutely the star, accompanied by slugger David Ortiz.

The two led Boston to their first World Series victory since 1918 in 2004 and Ramirez would be named World Series MVP after going 7-17 at the plate, hitting one home run and driving in four runs.

Boston would, again, go on to win the World Series in 2007, solidifying the Red Sox as a power, once again, in the American League.

On July 31, 2008, after voicing aggravations with the Boston front office regarding his current contract situation, Ramirez was dealt to the Los Angeles Dodgers in a three-way trade.

Ramirez performed well in Los Angeles that year hitting an absurd .396 while mashing 17 home runs and driving in 53 runs in only 53 games.

His 2009 season would be cut short on May 7 after being suspended 50 games for violating the MLB’s Joint Drug Prevention and Treatment Program after being prescribed a banned medication by his physician.

Ramirez would come back and finish the season with a .290 average while hitting 19 home runs and 63 RBI in 104 games.

After an injury-plagued 2010 season, Ramirez would be placed on waivers by the Dodgers and claimed by the Chicago White Sox who were hoping for a late-season playoff push.

After his White Sox days, his days in Major League Baseball were pretty much done, jumping on to the Tampa Bay Rays on January 21, 2011 but retired only a couple days into the season on April 8, 2011.

It is told that Ramirez was issued a 100-game suspension for once again violated the MLB’s drug policy, but instead retired.

Manny currently plays overseas in Japan, fulfilling his love for the game.

Ramirez currently sits 15th all-time with 555 home runs and 18th all time in RBI with 1831. He is currently not a member of the Major League Baseball Hall of Fame.