You are at:Home»Sports»Miami Heat Fans “PACK” the Arena after “Fan Up” Campaign (Yes, all 10 of them!) 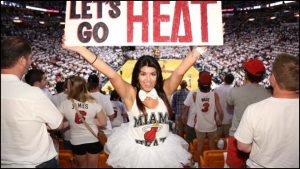 After the Miami Heat organization called out Heat “Fans” earlier in the week with their “Fan Up” campaign (http://bit.ly/cPYkVZ), it’s the clear the fans got the message. The Miami Heat, the most publicized and hyped team in maybe NBA history, faced off against the Phoenix Suns last night on the primetime ESPN game. As you’ll see below, the fans got the message loud and clear, packed in the arena and gave other fan bases across the country something to strive for. If every team had fans like the Miami Heat, the NBA would take over the world!!!
Here is the picture of the arena, literally FIVE MINUTES prior to tip-off:
And here is the arena FIVE MINUTES AFTER TIPOFF!
That’s right, after the team mortgaged their future on the attempt to land the 3 most coveted free agents in the biggest free agent class in the history of the NBA, the fans still don’t care. Miami fans have been spoiled with a championship won with Shaq & Dwyane Wade and now with the acquisition of the “Big 3″. Despite putting together the most hyped team in the history of the NBA, the franchise still needed to carry out a PSA like campaign to not only get fans interested, but to teach them how to be fans!
You read that correctly… the Heat organization is literally trying to teach their “fans” how to be fans. They’re telling them that fans show up before tip-off, cheer during the game, stay for the entire game, and actually show up for games not just have them on the TV in the background while they do blow and listen to techno music.
Ok, obviously I’m being a little sarcastic and general. I know not everyone who lives in Miami listens to techno!
But the reality is, Miami has long had one of the worst fan bases in the country and landing the “Big 3″ didn’t and won’t change anything. The Heat organization has done everything they could possibly do to drudge up fan interest and it just isn’t there. Not only have they assembled one of the most talented teams in the NBA, but they’re investing in an ad campaign to literally teach people what it means to be a fan. And to top it all off, they’re offering food and drink specials to the 2 dozen people who actually show up for the game on time!
I saw a comment last night from a Miami “Fan” who was arguing that the Heat has MILLIONS of fans but she was whining that tickets are too expensive so people don’t show up. That’s right, tickets in L.A., NY, Boston, Chicago or anywhere else are so much cheaper than in Miami. The Miami “Fans” use the news of a $25,000 ticket as an excuse when that only applied on one night and to floor seats. Never mind the thousands of affordable seats that are available for true fans every single night. Even worse, I saw a comment from a Heat fan where he literally bought tickets for last night’s game for $20 (Face Value of $60). C’mon now… too expensive?
More likely, this person and 90% of the people in Miami are ignorant as to what it means to be a fan and the Heat’s recent educational attempt proves my point. They actually think that if you watch them on TV occassionally once they’re “good” that it makes them a fan.
How about no…. just ask fans in New York, Chicago, L.A. (sometimes a bad example but the Lakers are consistently loved), Cleveland, Detroit, Boston, or a couple dozen other regions across the country what it really means to be a fan. Some fan bases have literally gone a hundred years without a winner and yet they’re more representative of what it means to be a fan than those hacks down on South Beach will ever be, no matter how many rings their team ends up winning.
I know some true fans in Miami and in Florida in general and they too are disgusted and embarrassed by the fan base not only of the Heat but of the Marlins, Rays, Buccaneers, etc. There are some great fans in Florida, but unfortunately for them, they’re outnumbered by about 10 to 1.
**Shout out to my boy @TheRobMac on Twitter for providing some inside info on this one**