You are at:Home»News»Miley Cyrus Apologizes for Revealing “Vanity Fair” Photos 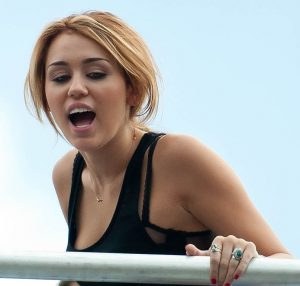 Disney superstar Miley Cyrus (aka “Hannah Montana”) was recently photographed by Annie Leibovitz for a series of photos to appear in Vanity Fair magazine. In the yet-to-be-published photos Miley appears to be topless and wrapped in a sheet. The photos haven’t yet been printed, they’ll make their debut in the June edition of the magazine, but they’ve already hit the web.

Since the existence of these revealing photos and the photo shoot have come to light, the Disney actress/singer has come under fire.

At only 15-years-old, Miley has already been the subject of scrutiny in connection with risque photos. Just one week ago, several photos of her draped across her boyfriend’s lap and showing off her green bra were released online. At least three other sets of not-so-innocent photos have been leaked online over the past year.

Miley issued a statement on ET today about the Vanity Fair shoot:

“For Vanity Fair, I was so honored and thrilled to work with Annie. I took part in a photo shoot that was supposed to be ‘artistic’ and now, seeing the photographs and reading the story, I feel so embarrassed. I never intended for any of this to happen and I apologize to my fans who I care so deeply about.”

“Unfortunately, as the article suggests, a situation was created to deliberately manipulate a 15-year-old in order to sell magazines.”

Considering that Miley is such a huge star and only 15, it doesn’t seem likely that she would be allowed to participate in a shoot like this if her managers, handlers, and parents didn’t approve it.

“Miley’s parents and/or minders were on the set all day. Since the photo was taken digitally, they saw it on the shoot and everyone thought it was a beautiful and natural portrait of Miley.”

It seems to me that the only concern anyone in the Miley camp really has now is how this negative publicity will affect their sales, Miley’s image, and ultimately their pocketbooks.