You are at:Home»Sports»MLB Upset That Derek Jeter Decided to Skip 2011 All-Star Game 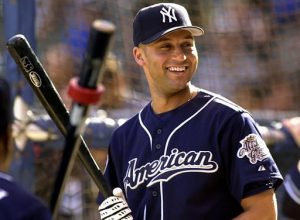 Over the weekend, Derek Jeter hit his 3,000th hit, but when Major League Baseball’s best gathered for the All-Star Game, the Yankees’ slugger was nowhere to be found, and not everyone is pleased with his decision.

An official with MLB says that the league is hoping Jeter would fly out on Tuesday and at least appear on the field during player introductions, tip his cap, and then go home to New York. The official added:

“This could have been a celebration of his 3,000th hit. He didn’t have to play.”
Several sports players also disagree with Jeter’s decision. Lance Berkman, a teammate of Jeter’s last season, commented:

“I don’t think it’s my place to speak for others. But for me, personally, if you get selected to be here you have an obligation. You gotta be here. If you can go, you gotta go.”

“I do believe, as a ballplayer, if you have no injuries, you should be here. The fans are the ones that vote for you and want to see you here.”

Major league sources say that even Joe Torre couldn’t talk Jeter into showing up, as the Yankees’ captain decided to take three days to himself.

Some people, however, don’t see anything wrong with Jeter’s decision with him having recently returned to the game after a calf injury. But Jeter, unlike other All-Stars including Jose Reyes and Alex Rodriguez, who are legitimately injured, Jeter played the entire week leading up to the All-Star break and his calf seemed to not have presented any issues.

Share. Twitter Facebook Google+ Pinterest LinkedIn Tumblr Email
Previous ArticleMitt Romney Made $15 Million Off Taxpayer Investment in Auto Industry Despite Being Opposed to Auto Bailout
Next Article Official Residence of the Vice President Can Now Be Seen on Google Maps