You are at:Home»Sports»Moondog Mascot – Cleveland Cavs 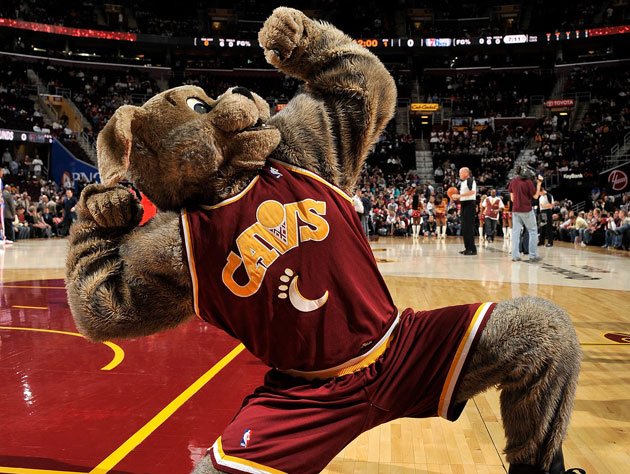 Moondog is one of two mascots for the American National Basketball Association’s (NBA) Cleveland Cavaliers who play their games at Quicken Loans Arena located in Downtown Cleveland, Ohio.

Looking for a replacement to their former mascot Whammer, a polar bear that debuted in the 1995 season and still makes occasional appearances today, the Cavaliers came up with Moondog.

Some people are confused on why the Cavaliers’ mascot is a dog and not a Cavalier. Up until Sir CC, a sword-wielding Cavalier debuted in 2010, that question was valid.

Moondog’s name is an ode to the ‘founder of Rock ‘n’ Roll’ Alan Freed who made his name at Akron’s WAKR and then shot to Rock ‘n’ Roll stardom at WJW in Cleveland. Freed would often refer to himself as the “Moondog” and in turn, refer to his listeners as “Moondoggers.” The name was a no-brainer for the Cavaliers to pick up and start integrating into its mascot in 2003.

In Moondog’s rookie season, he was selected to the NBA’s 2003-2004 All-Star Game which took place at the Staples Center in Los Angeles, California.

The aforementioned ‘Sir CC,’ who was introduced in 2010, serves as Moondog’s counterpart hyping up the crowd, throwing t-shirts and other giveaways to the fans in between game-breaks.

Moondog, along with Sir CC, spend their off-days visiting local schools and hospitals bringing smiling faces to young Cavaliers fans throughout the area.

In 2011, Moondog was ranked as the 21st best mascot in the NBA by Bleacher Report. Sports Illustrated holds a different opinion of the Rock ‘n’ Roll inspired mascot, however, ranking Moondog and Sir CC as the eighth best mascots in the Association in a 2016 article.

The high-flying mascot has put together a brief injury history just as any other NBA player has, just not so many other mascots.

In 2012 Moondog ended up on the Cavaliers’ sports injury report with an eye injury which sidelined the beloved dog for two games. The injury occurred after a fake fight broke out during the pre-game warm-ups between Cleveland and the Indiana Pacers.

Pacers forward David West was ‘at fault’ in the incident as he punched Moondog square in the eye leaving him with a sore eye. “He jumped at me so I thought we were playing around and then the next thing I know he went down,” West told reporters after the game. “I feel terrible about that, I really do … We were just having fun right before the game. We were just messing around. I really hope he’s OK. Make sure he knows I’m sorry.”

Moondog’s injury history lists one more incident where on October 14, 2014, the Cavaliers mascot sat out the contest between Cleveland and the Milwaukee Bucks after being diagnosed as a sick dog. It’s funny because of the term “sick as a dog.”

The 15-year veteran mascot is known for pumping up the crowd in between breaks but his claim to fame is his almost embarrassing success when it comes to swishing half-court shots from behind his back.