Progressive Field is a baseball park located in Cleveland, Ohio and is home to Major League Baseball’s Cleveland Indians.

The Indians, through Gateway Sports and Entertainment, acquired the land to the new ballpark in December of 1985 with the final touches coming in October of 1993.

With $91 million being funded by then-owner Dick Jacobs, the total cost of the new stadium cost $175 million 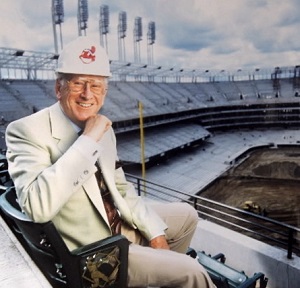 with the rest of the $175 million coming from Cuyahoga County tax payers.

Jacobs Field seating capacity opened up at 43,865 in 1994 with multiple renovations coming throughout the years. Progressive Field now seats 35,051.

Originally named Jacobs Field after Jacobs, “The Jake” as its affectionately called, opened its gates on April 1,1994 as an open house to patrons while the first official Major League Baseball game played at the brand-new stadium came three days later on April 4,1994 where the Indians played host to the Seattle Mariners. Cleveland would win the contest 4-3 in 11 innings.

President Bill Clinton threw out the first ceremonial first pitch in Jacobs Field/Progressive Field history on that day as well.

From 1995 to 2001, Cleveland set what was then the record for consecutive sell-outs in Major League Baseball history with 455 straight games. It was surpassed by the Boston Red Sox and Fenway Park on September 9,2008.

In 1997, Jacobs Field was home to the MLB All-Star Game which saw Indians catcher Sandy Alomar Jr. hit a game-clinching two-run homerun in the bottom of the seventh inning that would propel the American League to take home the crown. Alomar Jr. went on to win All-Star game MVP in front of his home crowd.

The name Jacobs Field would come to an end in 2008 after the naming rights agreement ran out. On January 11,2008, the naming rights to the stadium were sold to Progressive Corporation, a local insurance agency, for $58 million over 16 years.

2008 also saw the extension of the leasing agreement with the city, extending the lease 10 more years from 2013 to 2023. The new agreement also gave the Indians four five-year renewal options after the 2023 season.

Since 2008, Progressive Field has seen multiple renovations take place with some of the most notable being the insertion of their brand-new scoreboard in 2016. The scoreboard measures at 59 feet by 221 feet which stands as the largest scoreboard in Major League Baseball.

Another one of their renovations include the new “Corner Bar” located in the right field section which includes multiple concession stands, almost all being local restaurants or breweries. In 2014, they also renovated “Gate C” which saw an over-head bridge come down, opening up a better view of downtown Cleveland and the buildings that overlook the stadium.

In 2008, Progressive Field was voted by the fans as the Best Ballpark in Major League Baseball in a Sports Illustrated poll.