You are at:Home»Entertainment»The Ultimate Beginner’s Guide To eSports 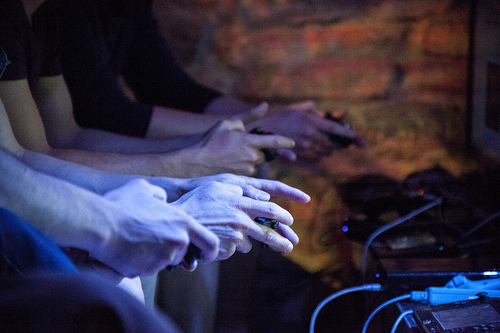 The Ultimate Beginner’s Guide To eSports

By ClevelandLeader Staff on October 10, 2017 0 Comments

Here at Cleveland Leader, we cover all sorts of businesses, communities, sports, and entertainment industries – so, we thought it was about time we covered eSports.

For as long as there have been human beings, we have all competed against each other for honor, glory and to show off our skills. While we no longer run at each other on horses or shoot arrows as far as we can on battlefields, the rivalry remains constant in a number of official sports and everyday competitions. We’re arguably a lot more civilized in how we compete these days, and a lot more technologically evolved, which has led to many of us battling our peers online and on video games.

This is the basis of eSports, aka professional video gaming.  For decades, gamers have battled against each other on a number of titles, seeing which of their friends was the ultimate Street Fighter, or who could finish Super Mario Bros the fastest. Even before home consoles became more readily available and affordable, gamers would gather at their local arcades to play cabinet titles like Space Invaders and Asteroids, all aiming to top the leaderboards.

With the introduction of the internet, online gaming industries began to flourish, attracting older gaming genres such as casinos. This became known as the iGaming industry, and before long professional poker players were battling it out at live-streamed tournaments around the world. To this day these tournaments continue, while more casual players can compete with others at sites like Betfair where a variety of table games, live dealers, and sports betting opportunities have existed since as early as 2000. There are even welcome bonuses offering up to £400 for signing-up.

Meanwhile, PC and console gaming also thrived following the introduction of the world wide web. As casino-enthusiasts competed and watched their favorite players, video game players were able to fight with and against other all around the world on games like Call of Duty and Battlefield. As games evolved, so too did the individuals who play them, and now the best players in the world are sponsored and paid millions to compete against each other in global tournaments.

While there are no official lists comprised of the games that can and can’t be played at tournaments, there are some that are more popular than others. In fact, some are so popular that they have entire tournaments dedicated to them. For now, we thought we’d focus on these games as it would take forever to cover each and every title.

When compared to other titles, Dota 2 isn’t particularly popular amongst players or viewers and yet the game is still the most lucrative title in eSports. Ever player ranked within the top thirty of 2017 is a Dota 2 player, with the top five having earned over $2 million in prize money so far. Plus, in 2014 The International Dota 2 Tournament offered winners a share of $10 million, the largest eSports prize pool in history at the time, though it continues to rise each year. We can’t be sure why or how Dota 2 manages to garner so much cash, but it is definitely the most financially rewarding game for aspiring eSports pros to get involved in.

Ever since the original PC game launched back in 1999, Counter-Strike has remained a staple in gaming. For over decade, leading CS gamers have competed against each other, and it’s due to this that CS tournaments can now award upwards of $10 million across the 540 CS tournaments. The game’s 2012 sequel Counter-Strike: Global Offensive is even more popular, with over 600 annual tournaments being held each year.

Of all the games on the eSports circuit, League of Legends is perhaps the most popular at this moment in history. Back in 2014, the LoL World Championships were watched by millions and the game’s popularity has continued to skyrocket ever since. This is mostly due to the game’s player base, which was made up of 67 million gamers in January 2014 according to Riot. Of those players, 27 million played LoL at least once a day, and considering Raptr claimed that LoL held a 19.97% share of PC games played in January 2017, it seems the game’s popularity hasn’t decreased over the years.

Just like how sports such as football, basketball and American football rank players and teams around the world, so does eSports. As of writing this, the most successful player according to eSports Earnings is Germany’s Kuro Takhasomi (KuroKy), a Dota 2 player who has managed to win over $2 million in prize money this year alone. The following 35 players are all Dota 2 players, including Bulgarian Ivan Ivanov (MinD_ContRol), Finland’s Lasse Urpalainen (Matumbaman) and China’s Zhi Hu (KaKa). It isn’t until South Korea’s Jun Tae Yang (TY) appears that Starcraft 2 gets a look in, and he is swiftly followed by the USA player Matthew Piper (FormaL), a CoD and Halo fanatic.

As far as teams go, few can compete with Team Liquid – a gaming community founded in 1998 that began sponsoring StarCraft: Brood War teams way back in 2010. Already this year the team has racked up over $12 million in prize money from games including CoD, CS: GO, Dota 2, FIFA, Halo and LoL. This is unsurprising when you consider the fact that their team is made up of many of the leading players we’ve already mentioned including Takhasomi, Ivanov and Urpalainen.

In August 2017, Seattle hosted the world’s largest eSports tournament The International: Dota 2 Championships. With a prize pool over $24 million on offer, 18 teams made up of 90 players gathered together to compete on Dota 2. As far as prize pools go, Dota 2 cannot be beaten, save perhaps for the LoL World Championship, which had a prize pool of $5 million last year.

Of course, this doesn’t necessarily mean The International is the most popular with players. The Hearthstone Global Games 2017 attracted almost 200 players, while both the Call of Duty XP Championship 2016 and ELEAGUE Season 1, a CS:GO tournament, were attended by well over 100 players each.  As there are so many different tournaments taking place at any given time all around the world, all of which feature different games or are made up of entire genres of games it can be hard to track which ones are the most popular and why.

Perhaps what makes an eSports tournament truly popular is how many viewers it gets, which is why so many big brands and companies have started streaming tournaments online. ESPN and Yahoo! are just some of the leading media behemoths that now share eSports-related news, while thousands of individuals stream tournaments live on sites like Twitch and YouTube. Plus, it appears that eSports will only continue to become more popular as time goes on. According to a study published by Limelight Networks in September, young men in the US already watch eSports more frequently than any other sport.

Once you get your head around the idea of people earning millions for playing video games in front of millions at a tournament streamed around the world, eSports is really quite simple to grasp. After all, games have always brought us together even when we are competing against one and other. What’s more, games are extremely interesting to watch, especially when they are played by professionals. Really, there are few sports that make more sense and deserve more recognition than eSports in our opinion, and we hope the industry continues to thrive.  Placing bets on eSports is now becoming big business as well with the growing popularity with many betting sites getting in on the action!